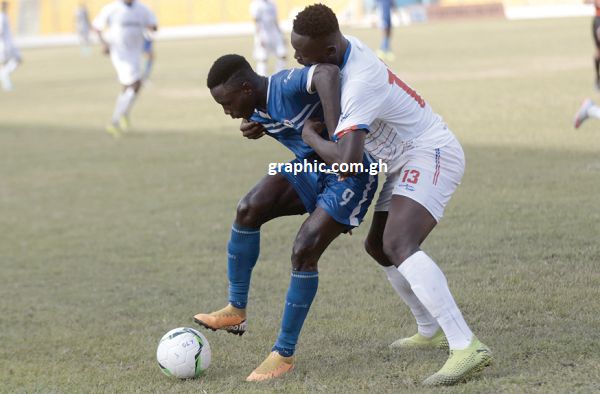 The match was largely dominated by the visitors, but their lead attacker, Elvis Kyei Baffour, who scored Liberty’s goal in the 46th minute, turned out to be the blight spot for his side as he wasted glorious chances and failed to deliver the maximum points to his side.

Both teams started slowly but it was Olympics striker, Yusif Abdul-Razak, who brought life into the match when he made some incursions in the Liberty area in the 20th minute but lacked the finesse in front of goal.

Midway into the game, the homesters made good on a set-piece, when they won a corner and David Amuzu elected to take it. He curled the ball beautifully into the area of Liberty and Nii Abbey Quaye fetched the opener when he tapped the ball home.

Liberty responded by relying on the flanks, using winger Abraham Wayo and George William Ansong but the duo’s crosses and pull-outs were ineffective as attackers Elvis Kyei Baffour and de-Graft Amponsah failed to reach the ball.

Liberty’s efforts for the equaliser were finally rewarded in the 46th minute when an incursion into the box by skipper Michael Ampadu caused him to be brought down by Olympics defender, Raymond Oko Grippman. The referee, George Mawuli Vormawah, whistled for a spot kick.

Elvis Kyei Baffour, who elected himself for the kick, converted beautifully for the equaliser.

After the break, Liberty took control of the game and made incursions into their opponent’s area. But marksman Kyei-Baffour lacked ball-control, finesse and potency to convert the begging chances.

The visitors continued their siege in the homesters area but try as they did , their lack of cutting edge and finesse in front of goal made it impossible for them to get the winner.

Against the run of play, Olympics launched a counter-attack and got a corner which was floated by David Amuzu which created a melee in the box.

In the ensuing melee, the ball ricochetted off a Liberty defender to a lurking Nii Abbey Quaye who beautifully chested and unleashed a volley into the back of the net for Oly to win the day.