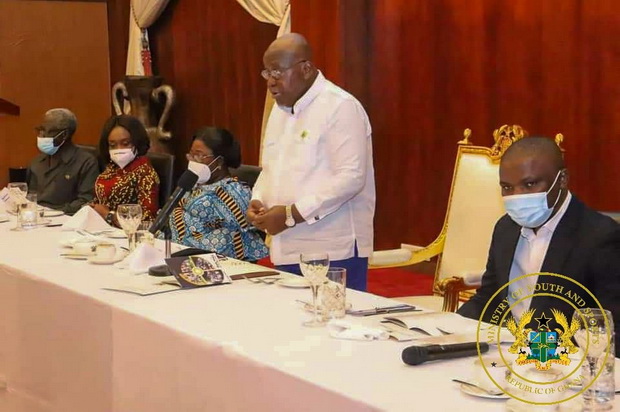 The $25m, which has been a subject of intense discussion, was disclosed during a fundraising to support the Black Stars and other national teams, breakfast meeting with heads of selected corporate institutions at the Jubilee House on Monday.
30.5k Shares

The 'reign' of Youth and Sports Minister, Hon. Mustapha Ussif has faced an early test this week, following intense media discourse over revelations of a budget estimate of $25 million United States Dollars for the Black Stars' Qatar 2022 FIFA World Cup qualifying campaign, next year's African Cup of Nations in Cameroon and other national team activities.

The $25m, which has been a subject of intense discussion, was disclosed during a fundraising, breakfast meeting with heads of selected corporate institutions at the Jubilee House on Monday. 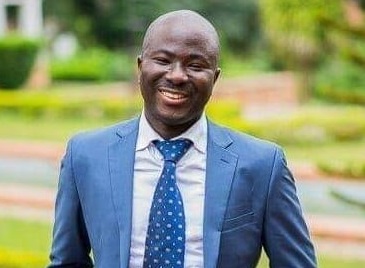 Before the President spoke, Mustapha Ussif, the Sports Minister had explained reasons for the breakfast meeting and why government thought it wise to reach out to corporate Ghana.

"In spite of the appreciable increase in the sports sector's budgetary allocations in the past four years, there is still the need for alternative funding to guarantee sustainable development in sports in the country, and also to help government finance the ever-increasing cost of funding our national football teams, especially the Black Stars," Mustapha Ussif said in his address at the breakfast meeting.

"It is in the light of this that it has become crucial to solicit support and partnership from corporate Ghana to ensure the continuous development of our sports and promotion of our national teams," the Minister explained.

To be honest, much of the discussion has glossed over this important reasons and explanation the Minister gave at the event.

Indeed, government has over the years, been the biggest financier of the Black Stars and all other national football teams. Expenses such as coaches’ salaries, air tickets, hotel accommodation, per diems to players and officials, bonuses, medicare, feeding, etc. are some of the major, unavoidable expenditure lines, which are taken care of by government. Undertaking this venture, for both qualifiers and main tournaments for ALL the eight national football teams, cost the Ghana government millions of cedis, if not dollars, annually.

This fact, is not the making of the new Sports Minister. Indeed, all his predecessors who serve on Parliament's Appointment Committee; OB Amoah, Mahama Ayariga, and Nii Lantey Vanderpuije, recently lamented the excessive financial impact of Black Stars and football national team funding on government's sports budget, as well as on other sporting disciplines.

It is estimated that the government of Ghana, has in the past decade alone, spent close to a staggering $70m dollars on the Black Stars and football alone, obviously, at the expense of other sporting disciplines.

To be fair, the Black Stars, under the regime of the erstwhile GFA administration, had some significant corporate sponsors, whose capital injection lessened government's financial burden. This means the amount government spent within the period stated could have been higher without sponsors like GoldFields Ghana, Guinea, Rice Masters, etc.

The situation is totally different today. The Black Stars of today has no sponsor, apart from Puma, which supplies the team's kits. Even the value of that sponsorship is said to have dropped considerably.

Worryingly, there appears to be no sign of the Black Stars securing any sponsorship. What this means is that government must continue to fund the Black Stars and other national teams if we, as a country, are to participate in international tournaments such as the World Cup, and the Afcon, which we have been striving to win again for years.

MUSTAPHA'S INTERVENTION
Reading the Sports Minister's speech delivered at the Presidential Breakfast meeting, I realised that he initiated this move to woo corporate support/donation to help government fund the Black Stars, in the absence of corporate sponsorship.

This is smart thinking. And a proactive measure, which needs commendation not condemnation. For President Akufo-Addo to prioritise holding a breakfast meeting with top CEOs in this regard, he surely must have been impressed with his Minister for Sports for not adopting the easy and usual approach of relying on government funds, but thinking outside the box to raise external support.

In the Minister's own words, government alone can no longer foot the bills of the Black Stars at the expense of other sporting disciplines, especially with the Tokyo Olympics looming. This was captured clearly in the Minister's address.

And should government succeed in its fundraising campaign, it would help it save and spend the money it would have used on the Black Stars on other disciplines, especially the Olympics campaign in August.

Engaging corporate support, whether private or public, by the Sports Ministry to help government fund the national teams, is an honest fulfillment of what the Sports Minister stated publicly during his vetting recently.

During the vetting, the Minister was asked what he would do to ensure that a significant portion of government's resources for sports development does not end up funding the Black Stars and football national teams at the expense of other sporting disciplines, as has been the case in the past. He promised to reach out to corporate Ghana to support.

The answer he gave is exactly what he is doing!

THE $25M
Much of the controversy, in the aftermath of Monday's breakfast meeting has centred on the $25m budget estimate.

The hoo-ha has been in different forms.

There are those who are genuinely concerned, who say the $25m is outrageous.

There is another group with the view that the Black Stars are noted for perennially failing at tournaments so they don't deserve such money being invested in them.

My understanding is that the $25m is a budget ESTIMATE for the Black Stars' Qatar 2022 World Cup campaign, the African Cup of Nations in Cameroon next year, as well as qualifying matches for other national teams until the end of 2022.

Many people are curious, and they have understandably asked for a breakdown of the $25m, line by line. It is a legitimate call, which I believe the Ministry should not have a problem disclosing, in the interest of transparency.

From my experience, however, a national football team budget ESTIMATES would normally cover air tickets for players to fly from their bases to Accra and back, air tickets to match venue if it is a qualifier, hotel bills, feeding, medicare, per diems, bonuses, pre-tournament training, etc.

If Ghanaians want to know the details, the Ministry should let Ghanaians know what the details are when it finally approves every budget from the GFA. After all, the new Sports Minister has already disclosed the cost of chartering a flight to South Africa recently.

And such ESTIMATES, normally cover the beginning of a competition or qualifiers, up to the end. So for instance, estimates for the Qatar FIFA World Cup qualifiers, which begins soon, would cover ALL expenses for the maximum eight matches the team would play, preparations, and maximum matches of the tournament, that is up to the world cup finals. Clearly, it DOES NOT mean that ALL the estimates would be spent. For the World Cup qualifiers, the minimum match the Black Stars would play in the qualifiers are the six group matches. If we win our group, then we play two more matches in the final round to determine whether we qualify to the World Cup or not.

It is the same for the Afcon tournament. Since we have already qualified for the tournament, the estimate would cover pre-tournament camping and training, and then the minimum group matches, as well as the remaining rounds.

A significant portion of football budget estimate is conditional; it depends on how far the team progresses. There are basic costs which are unavoidable but for costs like bonuses, if you don't qualify, you don't pay. Other costs are also dependent on qualification to tournaments and progression in tournaments.

BLACK STARS PUBLIC CONCERNS
Honestly, the name Black Stars now evoke anger and disappointment among a section of Ghanaians. There are those who feel the team, and those around it prioritise money over any other consideration. This notion, whether true or not, must be addressed with much seriousness. It is very important to win back public confidence. That is the way the love for the team will return.

Another area which requires immediate attention is the allegation of cronyism in playing, technical and management staffing of the Black Stars. This allegation, again, whether true or not, must change because it attracts unnecessary anger and hatred for the team. Whoever gets to play or work for the Black Stars, or any other national team, must do so on merit and no other consideration.

Also, those who are of the view that the team has been perennial failures as far as the Afcon is concerned really have a legitimate concern. Government continues to sink in money in the team and Ghanaians want to see the elusive Afcon trophy. It is a legitimate demand!

But to suggest that we should not spend on the Black Stars at all because they have been failing in the past is preposterous. I believe in measured and focused spending towards ending our 40 year Afcon trophy drought.
One day, we will win, and it may be soon, Insha Allah.

THE WAY FORWARD
The absence of sponsors for our flagship football brand, the Black Stars, is worrying, and it is unacceptable in modern football management.

No matter how difficult it has become to woo corporate sponsorship to sports and football, the nation's biggest sporting brand should always be an exception. It should be worrying to managers of the Black Stars, that the biggest sports brand in the country cannot attract even a single, substantial corporate sponsor.

The truth is, if managers of the Black Stars had been able to secure considerable sponsorship packages for the team, there wouldn't have been any need for fundraising campaigns for the team to attract this uproar.

Moving forward, it is important to move away from the status quo and curb profligate expenditure as far as the Black Stars is concerned, especially in the absence of corporate sponsorship. We need to be measured and we need to be focused in our expenditure.

One of the surest ways of curbing needless expenses, at a time the team has no significant sponsor, is to cut down on the padding of technical, administrative and management staff of the team whose roles are nebulous and duplications. This adds more avoidable costs.

It is refreshing the Minister for Youth and Sports has spoken passionately about proposing a new bonus structure for the Black Stars, which would tie bonuses with performance, in both tournaments and qualifiers.

This would address the concerns of some Ghanaians that, the state cannot continue to pay bonuses without commensurate benefits to the state. This new proposal, if implemented will ensure fairness to everyone involved; players, fans and of course the state.

Tying bonuses to success would not only safeguard the nation's resources, it would also bring out the best in everybody just as the sight of the finish line does to a sprinter.

After all, the state has demonstrated its ability and commitment to handsomely reward teams who put the nation at heart and go for gold.

President Akufo-Addo did it so beautifully recently for the victorious Black Satellites when they became African Under 20 champions.

The President, just as Presidents before him did for victorious teams in the past, will do it again for any team which doesn't focus so much on bonus and goes for gold.