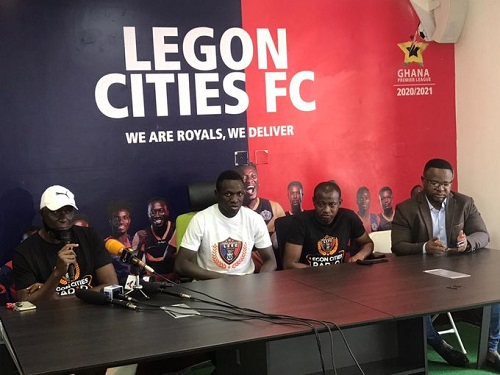 Big-spending Legon Cities Football Club are looking to Victorien Adje Adebayor to fire up their Ghana Premier League campaign after signing the Nigerien forward from Danish side HB Köge on loan until the end of the year.

The 24-year-old former Inter Allies captain struggled to settle at the Danish club when he joined them in October 2020, failing to make any appearances in the Danish First Division during his short stint.

However, the Royals hope Adebayor will bring his scoring prowess to bear on their unimpressive campaign when the second round of the competition commences later this month.

At the official introduction of the player yesterday, Legon Cities head coach Bashir Hayford said Adebayor would "augment the attacking force" of his struggling side, who are currently lying in  15th position on the league log having managed only 15 goals in 17 league matches.

He gave an assurance that the Royals would provide the right environment for Adebayor to thrive, adding that their newest player was the final attacker to join his team which already have former Black Stars captain Asamoah Gyan, Hans Kwofie, Richmond Antwi and Baba Mahama on their books.

Adebayor was the leading top scorer in the 2019/2020 Ghana Premier League season with 12 goals before it was cancelled last June in the wake of the COVID-19 pandemic.

The Graphic Online understands that the Royals reportedly paid €100,000 to HB Köge for Adebayor's services. However,  the club’s CEO, Terry Maxwell Aidam refused to disclose the financial details of the deal, but stated that the player would be due a monthly salary while the club was open to making the deal permanent based on the player’s performance during the period of the loan deal.

Adebayor disclosed to the media yesterday that even though Accra Hearts of Oak and his former club Inter Allies were also interested in signing him, he was attracted by the quality players in the Legon Cities squad and the club’s lofty ambitions.

Speaking through an interpreter, Adebayor said he was delighted to return to the Ghana Premier League but discounted reports that Hearts were his first choice but settled for Legon Cities because the Phobians were priced-out of his services.

He said he had been following the league online while in Denmark and was looking forward to contributing to the success of the team.

Denmark issues
The young forward said he was motivated to return to Ghana due to a desire for playing time to develop his career, and denied media reports that the Danish club farmed him out due to his desire to be reunited with his girlfriend.

Legon Cities spokesperson Kwame Dwomoh-Agyemang also disclosed that the Nigerien international has been handed jersey number 37 because jersey numbers all other numbers had already been assigned to players in the squad.