Each Black Satellites players to get $10,000 - Akufo-Addo 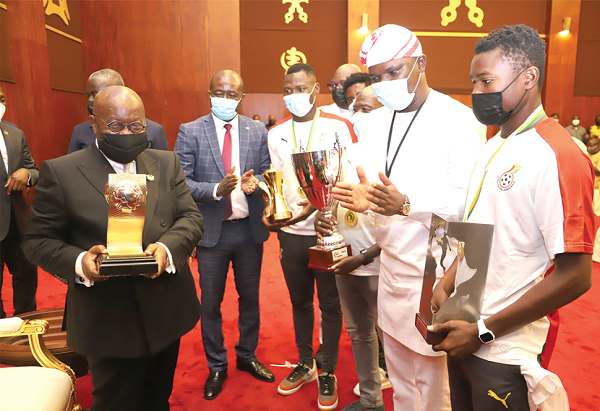 President Nana Addo Dankwa Akufo-Addo has announced a package of $10,000 each for the players of the Black Satellites Squad for winning the Under 20 African Cup of Nations.

“The country is very proud of your achievements,” he told the players at the Jubilee House, and said the amount was a token from the people of Ghana “to show our gratitude for what you have done”.

Each member of the technical team will also receive $5,000 as an expression of the nation’s appreciation.

The President said $5,000 of the money for the players would be invested on their behalf while the remaining $5,000 would be given to them in cash.

After receiving the trophy, President Akufo-Addo said the decision to invest the $5,000 over the next 10 years was to enable them to have something to live on in future, considering the short duration footballers spent in the sport.

“The people of Ghana are all together giving you $330,000 in appreciation of what you have done,” he said.

A visibly excited President Akufo-Addo said he was determined to give sports his maximum support because without the much needed encouragement and assistance it would be difficult to attain great heights.

He was confident that winning the trophy would mark the first of many good things to happen to Ghana and urged the players to feel proud playing for Ghana and be prepared to play for the country, especially for the Black Stars, in the future.

The President said: “I am lucky that my generation saw the great Black Stars winning all the cups that came their way”, and went ahead to mention the names of some of the great players.

To the admiration of the players and the team’s managers, President Akufo-Addo said, in his days as a young man, he played for the Republicans, a team that was formed by Dr Kwame Nkrumah and added that “we had a President who was crazy about football and it has not stopped up till today”.

He said the government would ensure that more successes are achieved in the future.

President Akufo-Addo said it had been long time since the Black Stars won the African Cup, and noted that the Satellites had now become the side that won laurels for the country.

He said the whole world was watching them now and, urged the team not to play with their training, be disciplined and ensure that they were fit always.

Minister
Introducing the team to the President, the Minister of Youth and Sports, Mr Mustapha Ussif, said the team left the shores of the country about three weeks ago and had brought great honour to the nation as they took gold medals and a trophy for being the champions of the tournament.