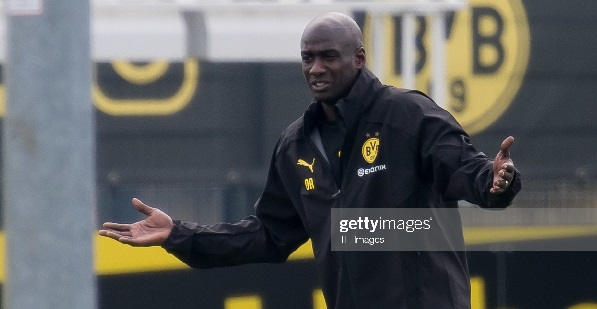 INTERIM Black Stars Coach, Otto Addo, has hit the ground running just days after his appointment as head of a reconstituted technical team to lead Ghana against Nigeria next month in a 2022 FIFA World Cup qualifying playoff.

Addo is reported to have travelled from his Dortmund base to London to meet with members of his backroom staff and some of the players he plans to build his team around for the two-leg clash. Last Wednesday, the Ghana Football Association (GFA) tasked the Borussia Dortmund talent coach to lead a new technical team which includes compatriots George Boateng and Mas-Ud Didi Dramani as assistants, while Irish-Ghanaian coach, Chris Hughton, plays the role of technical advisor for two-leg playoff.

The Graphic Sports understands that Addo jetted off to England last week for discussions with Hughton and Boateng, as well as some key players such Jordan Ayew, Thomas Partey, Andy Yiadom, Baba Rahman, among others, about the upcoming assignment.

“I can confirm that the GFA facilitated talks between Otto Addo, the players and members of his technical team and so far things are going on smoothly,” a GFA official told the Graphic Sports last Saturday.

The Black Stars play host to the super Eagles on March 24 at the Cape Coast Stadium and travel to Abuja to face the Nigerians in the return leg three days later.

According to GFA sources, Addo and Hughton had earlier held talks on phone ahead of their meeting in London. He was also expected to meet Southampton defender, Mohammed Salisu in a bid to convince him to make himself available for the important playoff.

Salisu, 22, has on many occasions turned down invitations to play for the national team, but Addo hopes a face-to-face meeting could help understand the youngster's concerns and also assure him of his future in the national team.

Even though Addo is already familiar with the playing body as assistant coach during the short-reign of Serbian Milovan Rajevac, the Dortmund man plans to touch base with many of the players before the reassemble to prepare for the Nigeria clash.

The meeting with former Brighton and Hove Albion Manager, Hughton is also to ensure a smooth working relationship among the technical team charged to help qualify Ghana to the 2022 FIFA World Cup in Qatar later in the year.

Hughton, born in London to an Irish mother and a Ghanaian father, has been tipped as Ghana's next coach after the World Cup qualifying playoff. He is said to be the preference of the government during the search for a replacement for Rajevac, who was fired last month following Ghana's poor AFCON campaign in Cameroun.