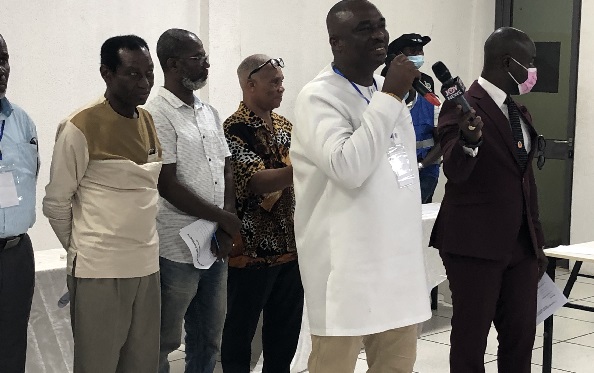 Newly-elected president of the Ghana Boxing Authority (GBA), Abraham Kotei Neequaye, has promised to work closely with all stakeholders in the fraternity to help revive the sport in the country.

Mr Neequaye, who garnered 54 votes to upset hot favourite, Henry Manly-Spain, who polled 46 votes, said he was ready to give the youth the chance to develop boxing.

In an interview with the Daily Graphic after his swearing-in in Accra yesterday, the former CEO of Baby Jet Promotions, believed boxing must be developed from the grassroots and, therefore, looked forward to working closely with the amateur arm of the sport.

He said he would not relent to add Mr Manly-Spain to his executive board when the time comes for him to make appointments.

“This is an election and I won but it doesn’t mean I will neglect anyone. I am willing to bring everyone on board to make the GBA work,“ said Mr Neequaye.

“We need to work tirelessly to make boxing great again and that is a collective responsibility of every stakeholder of the sport”.

Despite being the favourite, Mr Manly-Spain failed to win his second GBA presidential election, having first lost to the outgoing president Peter Zwennes in 2013.

However, the businessman noted that he was ready to offer his support to the current executive to ensure they succeed.

“I lost and I have to accept that the delegates didn’t buy into my ideas. At this point, I will have to take a step back and make a decision in the future,” Mr Manly-Spain told the Daily Graphic.

“I congratulate my opponent for winning this contest and I wish him the very best in all his endeavours”.

Former boxer, Rabone Dodoo, and referee/judge, Roger Barnor, were sworn in as the first and second vice-presidents of the GBA after going unopposed.