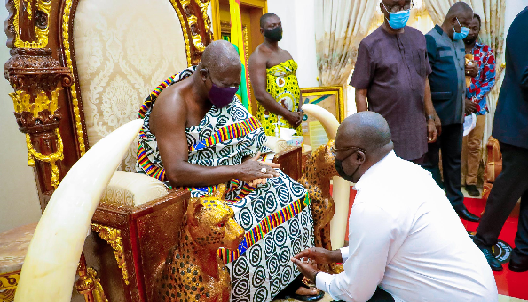 Vice-President Bawumia (3rd left) in a chat with the Asantehemaa, Nana Konadu Yiadim III, at the Manhyia Palace Follow @Graphicgh

The Asantehene, Otumfuo Osei Tutu II, has admonished losing candidates in the December 7 general election who may be aggrieved to use legal means to challenge the results, instead of resorting to violence.

He said Ghana's democratic credentials were at stake but expressed the confidence that the country would pass the test once again.

Otumfuo Osei Tutu gave the advice when the Vice-President, Dr. Mahamudu Bawumia, paid a courtesy call on him at the Manhyia Palace in Kumasi yesterday at the start of a four-day tour of the Ashanti Region.

While in the region, Dr. Bawumia will, among other things, inaugurate some projects undertaken by the Akufo-Addo administration.

The Asantehene said this year's elections were crucial to the survival of West Africa, in view of the fact that five countries were due for elections this year.

He said the situation in Cote d'Ivoire, for instance, was not too clear, and added that it was time Ghana showed the way.

He urged presidential aspirants to market themselves with good messages, clearly stating what they had to offer Ghanaians.

He explained that it was when all aspirants effectively sold their messages that the electorate would be in a better position to make choices.

He indicated that Ghana remained the only country Ghanaians had and, therefore, it was important for all to protect the peace of the nation.
Decency based on sound messages, he said, should permeate the campaigning, not insults.

Emphasising that his doors were always opened to all politicians, Otumfuo Osei Tutu said he would shower his blessings on all aspirants and welcome the winner.

"At Manhyia, our doors are always opened to welcome all and to promote peace in the country," he said.

The Asantehene charged the Ashanti Regional Chairman of the New Patriotic Party (NPP), Mr. Bernard Antwi Boasiako, and the Regional Minister, Mr. Simon Osei-Mensah, to ensure that peace was maintained in the region.

The Vice-President thanked the Asantehene for his continual counselling and blessings.

He promised to hold onto the pieces of advice proffered by the Asantehene.

"We are here to let the people know what President Nana Addo Dankwa Akufo-Addo has done for them to give him four more years to do more," he said.

On the same day, Vice-President Bawumia commissioned a rice milling factory under the One-district, One-factory (1D1F) initiative at New Edubiase.

The factory, a joint project between the Ministry of Food and Agriculture and a private investor, B. Kakyire Agro Chemicals, has the capacity to mill 140 bags of rice a day.

It is engaging 20 outgrowers to meet both local and foreign demand.

The factory has a workforce of 37, which is expected to quadruple in the next year when the project fully harnesses its 465 acres of land.

Dr. Bawumia said the government had rolled out 232 factories, out of which 76 had been completed.

He said the New Edubiase factory had the potential to address youth employment in the region and the town in particular.

He said the project and many others were testament to President Akufo-Addo's good intention for Ghanaians, for which reason the President should be given four more years to do more.

Speaking in Asante Twi, the Vice-President said this year's elections were about securing and safeguarding the future of Ghana, and that voters should not make a mistake by voting for the wrong aspirant.

The Project Manager, Mr. Yaw Addo, told the Daily Graphic that Ghana stood the chance of adding more value to its local rice for the country to become the main supplier in the sub-region.

He commended the government for its foresight in initiating the 1D1F policy.