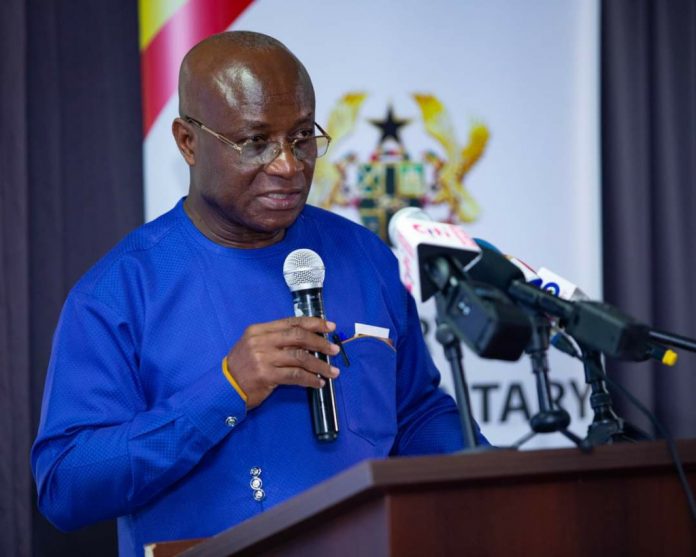 The New Patriotic Party (NPP) Members of Parliament in the majority caucus, have reneged on their stance and agreed to support the Finance Minister, Ken Ofori-Atta for the 2023 budget passage after an intervention by the leadership and Council of Elders of the NPP on Tuesday night.

A statement dated November 22, 2022, jointly signed by the Majority Chief Whip, Annoh-Dompreh, and the General Secretary of the NPP, Justin Kodua Frimpong said "it has been agreed by all to refocus and recline to the earlier position requested by President Akufo-Addo.

That is, the demand for the removal of Mr Ken Ofori-Atta from office be stood down until the conclusion of the round of negotiations with the International Monetary Fund (IMF) which would feed into the 2023 Budget.

This also means they have reneged on their stance not to support Mr Ofori-Atta for the presentation of the 2023 Budget Statement and Economic Policy on November 24, 2022 on behalf of the President; and the subsequent passage of the Appropriation Bill.

The MPs had earlier in a meeting with the President agreed to these terms and to resurrect the issue only after these three items had been cleared.


But in separate media interviews, Andy Kwame Appiah-Kubi, spokesperson for the group spearheading the call for the removal of Mr Ofori-Atta said they had reneged on their stance and were no longer going to support Mr Ofori-Atta to go through the three items.

The Majority Leader and Minister of Parliamentary Affairs, Osei Kyei-Mensah-Bonsu also in separate media interviews subtly supported the move and said it was no longer a call by just some 90 or something MPs in the Majority Caucus, but it was a general caucus call.

Kyei-Mensah-Bonsu in an interview with a Kumasi based radio station alleged that Gabby Asare Otchere-Darko, a leading member of the NPP had even accused him of being the mastermind behind moves to remove Mr Ofori-Atta from office.

Gabby on his part denied saying that Kyei-Mensah-Bonsu was the mastermind behind the moves.

Mr Otchere-Darko maintained that he had "said no such thing..., either directly or indirectly".

Read also: I have never accused Kyei-Mensah-Bonsu of being behind calls for Ofori-Atta's resignation - Gabby

What the Majority Leader said

Speaking in Twi in an interview on Sompa Radio, Mr Kyei-Mensah-Bosnu said he had heard Mr Otchere-Darko accusing him of instigating calls for the Finance Minister's removal in Parliament.

The Majority Leader also questioned the authority of Mr Otchere-Darko to level such allegations against him.

RESOLUTION OF IMPASSE IN THE NPP PARLIAMENTARY GROUP

Over the past two weeks, especially, after the President had engaged the Majority Caucus over calls for the ouster of the Minister of Finance as well as the Minister of State at the Ministry of Finance and a statement on the engagement had been issued, the country has witnessed a heightened public/media discussion on same subject matter.

There have been occasional individual interventions some of which have not helped the resolution of the issue in contention.

On the other hand, some of these interventions have contributed to escalate tensions and suspicions.

At a meeting this evening, the 22nd of November 2022, involving the Majority Caucus, the Leadership of the Party and the Council of Elders, it has been agreed by all to refocus and recline to the earlier position requested by the President,
to wit:

1. The demand be stood down until the conclusion of the round of negotiations with the International Monetary Fund (IMF) which would feed into the 2023 Budget;

2. The presentation of the 2023 Budget Statement and Economic Policy on the 24th November 2022 by the Finance Minister on behalf of the President; and

3. The subsequent presentation and passage of the Appropriation Bill

The meeting agreed that the President would act upon the initial request of the NPP Parliamentary Caucus after the conclusion of these matters.

Leadership and the Party in this regard call upon the Members of Parliament to attend to all Government Businesses in the House /including, in particular, the 2023 Budget Statement and Economic Policy and all connected matters 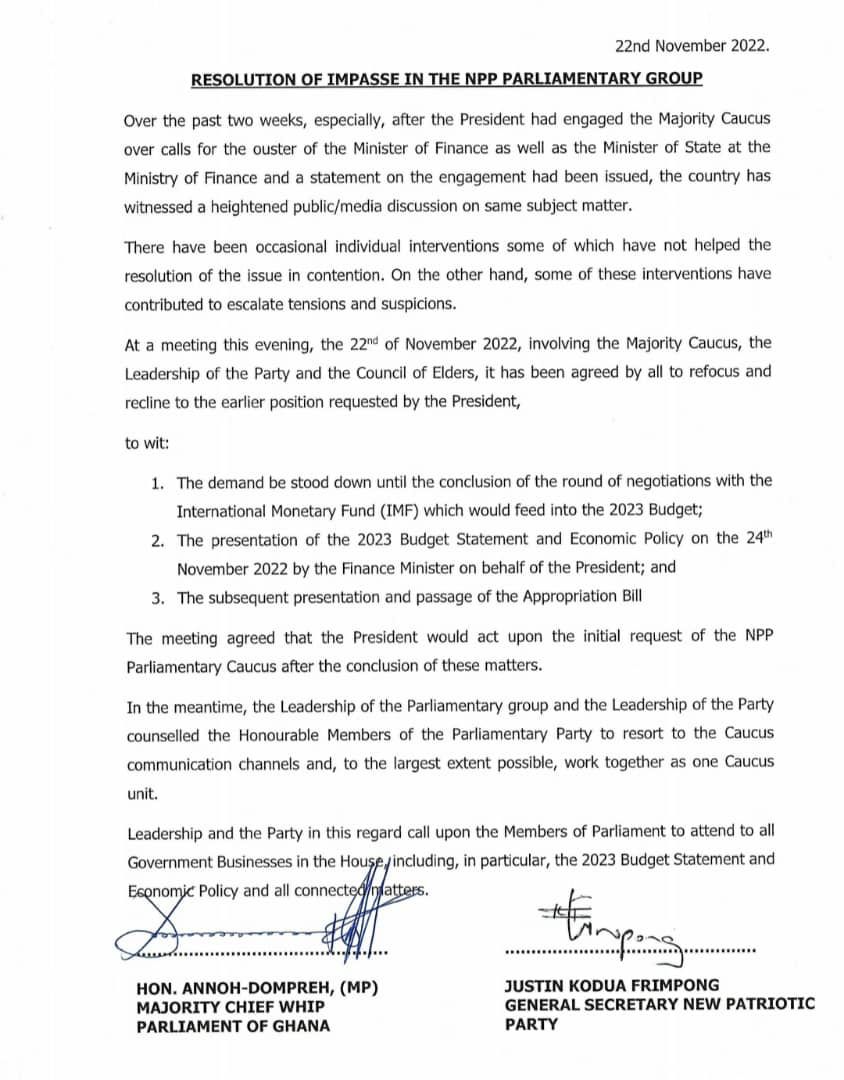