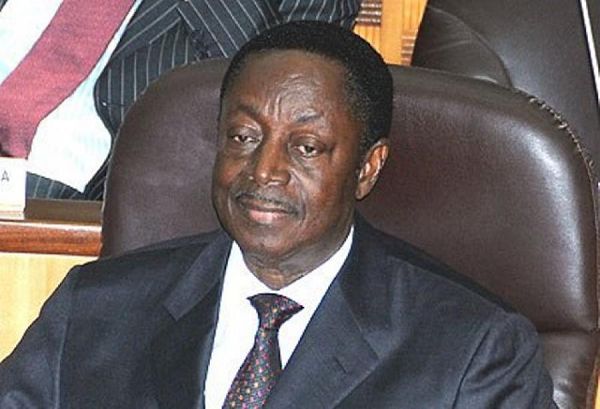 A former Finance Minister, Dr Kwabena Duffuor, has confirmed his intention to contest the presidential primary of the opposition National Democratic Congress (NDC) when the race opens.

According to him, he would gladly accept the challenge to lead the party as the presidential candidate for the 2024 general election.

Dr Duffour, who is also a former Governor of the Bank of Ghana (BOG), made his intentions known in an interview with the media after delivering a lecture on the topic " The Ghanaian Dream: Transforming the Economy Through the Creation of Jobs and Opportunities For All" in Accra on Monday, November 29, 2021.

Dr Duffuor stated emphatically that he would welcome a decision of the delegates when given the chance to lead the party as its presidential candidate.

" I was the Finance Minister so I was in politics but we have not started talking about the NDC presidential race yet, if we get there and I am given the nod, why not", he stated in his response to a question posed by the media.

He acknowledged the work of the Speaker of Parliament, Mr Alban Kingsford Sumana Bagbin, and the Minority Leader, Mr Haruna Iddrisu, who were holding high the flag of the NDC in the current political dispensation.

Dr Duffuor said either Mr Bagbin or Mr Iddrisu could be his running mate when given the nod to the lead the NDC.

He touted his achievement as the Finance Minister from 2009 to 2012 during which he was able to stabilise the foreign exchange rate and maintained a single inflation.

He said research conducted by the IFS has shown that exchange rate depreciation was a significant driver of Ghana’s public debt dynamics, as it accounted for almost 30 per cent of the growth of public debt between 2006 and 2019.

These problems, he said, called for the effective management of inflation and the exchange rate to ensure their stability to protect living standards and support rapid economic growth and development.

Dr Duffuor’s presidential ambition came to light when in a one-minute 21 seconds video,he was seen canvassing for more supporters for the opposition NDC.

The video ends with Dr Duffuor walking from the Independence Arch giving an assurance that "What the NDC means to me is that everyone in this country will have an opportunity to achieve the Ghanaian dream."

It ends with a rallying call for people to join the NDC to achieve the Ghanaian dream and for them to contact branch executive members at their polling stations to register.

If he does contest, he will be squaring up against former President John Dramani Mahama.

Others also believe Dr Duffuor wants to shore up the numbers for the NDC to win the 2024 election with ease.

Who is Dr Duffuor

Prior to becoming Minister of Finance and Economic Planning, he served as the Governor of the Central Bank of Ghana from July 1997 to 2001, and was named as one of the four best Central Bank Governors in the World at an IMF/World Bank meeting in 1999 (Euromoney Publication).

He retired voluntarily from the Bank of Ghana in September 2001, with high commendation from the sitting President for his contribution towards the stabilisation of the Ghanaian economy during his term in office.

Dr Duffuor is the Founder and Senior Advisor to HODA Holdings, an entity with over 15 business enterprises in Insurance, Banking, Real Estates, Farming and Media Conglomerate.

He is also the founder of Institute of Fiscal Studies, an economic policy think-tank.

In the run-up to the 2020 elections, Dr Duffuor led a major campaign in the Ashanti Region especially his native town of Kumawu to woo votes for the NDC.