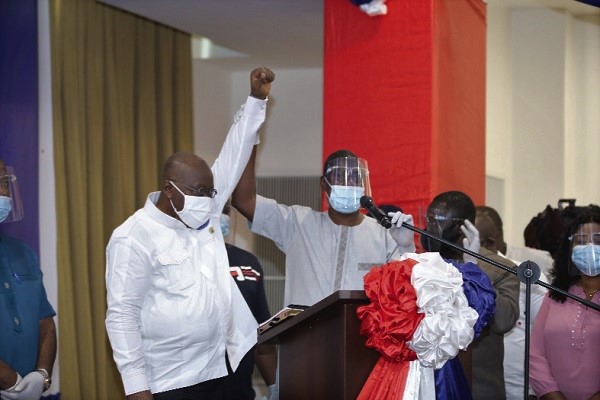 President Akufo-Addo being acclaimed by Mr Samuel Tettey, Deputy Commissioner of the Electoral Commission, to the National Council of the NPP as the flagbearer. Picture: SAMUEL TEI ADANO
30.5k Shares

President Nana Addo Dankwa Akufo-Addo has officially become the flagbearer of the governing New Patriotic Party (NPP) for the December 7 elections after the National Council of the party gave him an overwhelming endorsement last Saturday.

In a similar fashion at the same special council meeting, members of the council gave the green light to Vice-President, Dr Mahamudu Bawumia, to be the running mate after President Akufo-Addo had nominated and presented him as his running mate for the fourth time.

This marks yet another Akufo-Addo-Bawumia ticket as the NPP gears up for this year’s presidential and parliamentary elections.

This year, the NPP had to rely on its national council for acclamation of its flagbearer and running mate, due to the outbreak of the coronavirus disease (COVID-19), which has occasioned some safety protocols, such as keeping a social distance among people of up to two metres, wearing of masks, washing of hands with soap under running water and sanitising the hands and surfaces with alcohol-based sanitisers.

Hitherto, the event, which was in line with the party’s constitution to acclaim a presidential candidate who remained the sole candidate after close of nominations, would have taken place in front of a huge party faithful at a congress and climaxed with a rally.

The acclamation, which came on the heels of the party’s parliamentary primaries a week ago, saw a Deputy Chairman of the Electoral Commission (EC) in charge of Operations, Mr Samuel Tettey, raise the hand of President Akufo-Addo.

Before he could lower them, there were shouts of “any challenger” to which members of the council responded “no challenger”.

After Mr Tettey had declared him the unopposed flagbearer of the party, members of the party present welcomed the acclamation and sang and danced to Asem papa bi a mate, a choral song which has become one of the favourite repertoires of President Akufo-Addo.

The impressive ceremony, held amid tight security and strict observance of the COVID-19 hygiene protocols, attracted many of the bigwigs of the NPP, including former President John Agyekum Kufuor, Dr Kwame Addo Kuffour, the Senior Minister, Mr Yaw Osafo-Maafo; the National Chairman of the party, Mr Freddie Blay; the General Secretary, Mr John Boadu; the First Lady, Mrs Rebecca Akufo-Addo, and the wife of the Vice-President, Mrs Samira Bawumia.

President Akufo-Addo, who said he was humbled by the gesture, thanked the national council and the NPP for their belief and the confidence reposed in him and promised to lead the party to an unquestionable and resounding victory in the election.

President Akufo-Addo, in his acceptance address, expressed disappointment that the party could not hold its internal elections in front of a large crowd as it used to do due to the observance of social distancing and other COVID-19 protocols, but acknowledged that through technology many members and supporters of the party, both home and abroad, were able to follow the events as they happened.

He described his acclamation as a rare experience in his long political career because anytime he had to run for office, it was a long and often bruising battle.

Tracing the history of the Danquah-Dombo-Busia political tradition, President Akufo-Addo said the leadership of the NPP imposed a sacred trust because “our forefathers right from the beginning of formal politics in this country, made an unspoken pact with the people to treat them with respect and if given the opportunity to govern, do so with honesty and dedication.

He paid tribute to the forebears of the party, including former President Kufuor, for their exemplary leadership, saying “at a moment like this, my mind goes to our leaders throughout the ages and I feel strongly the weight of responsibility that comes for continuing to step in the shoes of men who show exemplary leadership in defining moments of Ghana’s history.”

If you are a leader of the NPP, if you are a member or supporter of the NPP you will know that every inch of democratic space was fought for, and sometimes died for, in this country. Our Fourth Republican Constitution is crafted on multiparty democracy. We did not get there by chance, it took a long and difficult battle, today some take it for granted,” he observed.

President Akufo-Addo emphasised that the multiplicity of media outlets and the freedom of the press did not become part of the governance landscape on a silver platter.
“It took a long and difficult battle, waged largely by this political tradition to get our nation to where we are today,” he stated.

Recounting some of the party’s battles to remind members of their history, the December 2020 flagbearer of the NPP, told the gathering that: “We know what we stand for, the rule of law, freedom of speech and of the press, individual freedoms, the determination to liberate the energies of the people to the growth of the property owning democracy, to build on the economy that will create wealth for all our people and not just for the elite few.”

He added that the Danquah-Dombo-Busia tradition was the only political tradition in the country that had espoused the development of the country and of the individual as part of our foundational beliefs, hence having as its motto ‘Development in freedom’.

President Akufo-Addo said whenever the tradition had the opportunity to govern, it had been guided by those long-held principles and, therefore, the party could not and would not stray from them.

Sharing his thoughts on the forthcoming presidential contest in December this year, the NPP flagbearer mentioned that “the 2020 elections is between the current
President and the President who was voted out in the last contest.”

“It is about which of the leaders you believe can put in place the necessary measures to revive and strengthen the economy, businesses and social services and build our country out of the coronavirus pandemic,” the President pointed out.

He, therefore, rallied all the NPP faithful to join hands to work hard together for a great victory on December 7, 2020, to embrace the future and our destiny with confidence

“We are told that those who are responsible for the worst economic performance of the last 30 years have learnt their mistakes and seek another opportunity to correct their mistakes that they have learnt their lessons, dare I ask: Should the presidency be for experiments,” the President asked the delegates, and said: “Surely not, you the Ghanaian people deserve better and you will get better on December 7 with four more years for Nana and the NPP to do more for you.”

Commenting on the ruling of the Supreme Court last Thursday on the election register for the first time, President Akufo-Addo said the road had been cleared for the EC to proceed.

He, therefore, called on every member and sympathiser of the NPP and on all eligible Ghanaians to go out and register so they could exercise their civic responsibilities by voting on December 7, 2020 to elect a government of their choice in a free, fair, peaceful and transparent election.

The pandemic notwithstanding, he said: “We have to strengthen Ghanaian democracy, and the December 2020 presidential race represents probably the clearest of choices ever for the Ghanaian people to make.