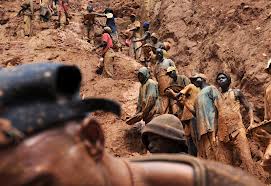 A deadly lung disease is said to have claimed the lives of 100 people, mostly galamsey operators, within three years in mining communities of Konongo and Odumase in the Ashanti Region.


According to the Tuberculosis (TB) Control Co-ordinator in the Asante Akim North municipality, Dr Paul Ntiamoah, the disease — chronic obstructive airway — was linked to illegal gold mining in the area.

So far, he said, there was no cure for the disease, which could wipe out many lives, especially as galamsey activities intensified  in the area.

Dr Ntiamoah told the Daily Graphic that there were strong signals that many more galamsey operators could die in the future if people continued to be exposed to the dust and fumes that emanated from illegal mining activities.

However, the deputy director in charge of Public Health, at the Ashanti Regional Health Directorate, Dr Joseph Oduro, has said the regional directorate is yet to be informed of the disease and the death toll.


Explaining further, Dr Ntiamoah said “the disease attacks like TB but defies any   drug and  the symptoms include shortness of breath that gets worse with time. Patients cough phlegm with blood and when it happens they may think it is TB”.

“You see young people, some about 18 years, dying and it is very painful,” he said.

Dr Ntiamoah attributed the genesis of the disease to the manner in which the miners washed for the gold.

“Normally, they prepare it in a small room where dust and mercury combine, and when this is inhaled the lungs are destroyed,” he said.

He said the disease was not infectious but “very painful and deadly”.

He said patients, including those who reported to the medical facilities, complained that they had had about two months of continuous coughing.

“Based on that, we undertook an X-ray of the lungs and saw complications and opacity in the lungs similar to TB,” he added.

According to him, initially attempts were made to treat the symptoms as TB but after six months the complications became intense.

“In TB, the impact of the complications is less and what is even more refreshing is that it is curable,” he said.

Dr Ntiamoah said for now the best remedy for the situation was education.

Consequently, medical personnel from the Asante Akim North Municipal Health Directorate began an intensive educational programme to educate the people on the dangers of the disease and how to prevent it, he said.

He advised the people to stay away from galamsey because of the dangers associated with it.

Konongo is noted for its gold production, dating back to 1903, when the ore was discovered there.

The Konongo Mines that operated in the past collapsed in the mid-1990s and it was not until recently that the Owere Mines took over to operate the concession.

However, Konongo-Odumase has become one of the notorious illegal mining areas in the Ashanti Region .

Hundreds of youth from the local communities and outside have formed mining gangs and taken to the activity as their main source of employment.

The management of the Owere Mine has, in recent times, complained seriously about the unrestrained activities of illegal miners which have become a major challenge to its operation.

In the past, the police made attempts to arrest illegal miners but to no avail.

The illegal activities have led to attacks on the land close to the River Anum, where the Ghana Water Company has its treatment plant.

The River Oweri has not been spared, as it has become very dirty.