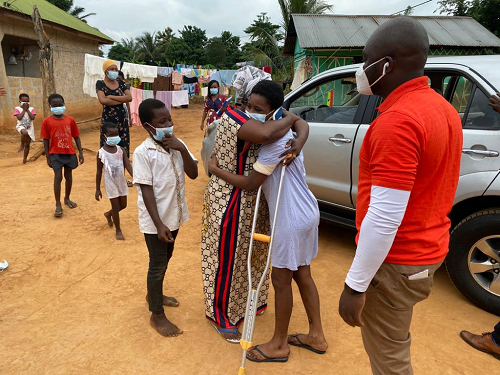 Rita Owusu (in clutches) meets her mother after months of being away in the hospital. Looking on is Rev Amaris Nana Adjei Perbi (in red and white), the Lead of Vodafone Ghana Foundation, who led the team that drove Rita home.
30.5k Shares

Vodafone Ghana Foundation (VGF) last Saturday responded to the Graphic Needy Trust Fund’s appeal and paid the hospital bill of Rita Owusu, who had been held at the 37 Military Hospital more than a week after discharge because her parents could not her bills.

The foundation also accepted to pay for the surgery of Rita’s younger sister, Theresa, who was waiting for help to undergo surgery at the St Joseph’s Hospital, Koforidua, to treat her fractured legs.

Additionally, VGF will foot the bills of Priscilla, the oldest sister, who is being treated for brain injury.

The three sisters were involved in a serious accident that left them with severe injuries, whose cost of treatment overwhelmed their parents.

As a result, their parents appealed to the Graphic Needy Fund for assistance.

Explaining why the Vodafone Ghana Foundation came to their aid, the foundation Lead, Rev Amaris Nana Adjei Perbi, said they had been touched by the plight of the sisters after reading their story in the Daily Graphic.

He said the foundation had embarked on an initiative, dubbed Homecoming, to help financially challenged patients to pay their medical bills.

“Rita’s case falls within our Homecoming initiative, which will pay the bills of 300 [needy] patients held in hospitals after discharge because they cannot pay their bills,” he explained.

He added that the initiative was being rolled out in three phases, the northern belt, middle belt and southern belt.

Rev Perbi said though the Homecoming initiative was currently being carried out in the middle belt, the foundation had to come down to the southern belt to help the sisters because of their touching situation.

Rita expressed gratitude to Vodafone Ghana Foundation for the kind gesture, adding she had no hope of help coming her way.

“I am most thankful to you [Vodafone],” she said tearfully.

Her father, Mr William Owusu, also thanked Vodafone profusely and prayed for the company to prosper.

“I realise that it is worth buying Vodafone credit. Even if it is GH₵1, it adds to the company’s profit,” he said.

Later in an interview, Rev Perbi said the Vodafone Homecoming Initiative had helped release 96 needy patients from hospitals in the Northern belt after they had been held for non-payment of bills.

“Some of these financially challenged patients were working in the hospitals to offset their bills,” Rev Perbi revealed.

The Homecoming initiative, he added, would bring relief to patients across the 16 regions of Ghana.