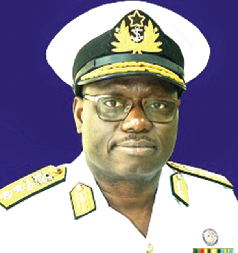 The vigilance of the Multinational Maritime Coordinating Centre has scared away activities of more than 16 vessels on the Gulf of Guinea suspected to be pirates.

The move is in a bid to curb the growing pirate attacks on the high seas.

The acting Director of the ECOWAS Multinational Maritime Coordination Centre (MMCC) Zone F, Commander Yussif Benning, said in an interview that intelligence gathered by the centre was passed on to the navy and other security agencies who then chased away the pirates or cautioned the vessels of imminent threats.

“Once we gather intelligence through our monitoring of suspicious activities of vessels or boats on the Gulf of Guinea, we alert the Navy and other relevant security agencies to save the situation,” he said.

The Gulf of Guinea has experienced an unprecedented rise in the number of multiple crew kidnappings.

According to the International Maritime Bureau (IMB), the Gulf of Guinea saw 84 attacks on ships, with 135 seafarers kidnapped for ransom in 2020 alone.

The region now accounts for over 95 per cent of all kidnappings for ransom at sea.

The MMCC Zone F, which operates from the Osu Castle in Accra, monitors the seas of Ghana, Cote d’Ivoire, Liberia, Sierra Leone and Guinea.

Commander Benning said piracy, armed robbery at sea, kidnapping of seafarers, illegal fishing, smuggling and trafficking posed a major threat to maritime security in the Gulf of Guinea and ultimately to the economic development of the entire region.

He said once kidnapped, the vessel crew was held on shore until their release was negotiated.

He said the ransom paid to the pirates for the release of those kidnapped ranged from $50,000 to $150,000 and sometimes more.

“This is a worrying trend that can only be resolved through increased information exchange and coordination between vessels and reporting and response agencies in the Gulf of Guinea Region”, he said.

“Despite prompt action by navies in the region, there remains an urgent need to address this crime, which continues to have a direct impact on the safety and security of innocent seafarers,” he added.

Crew kidnappings were reported in 25 per cent of vessel attacks in the Gulf of Guinea – more than any other region in the world.

The furthest crew kidnapping in 2020 occurred almost 200 nautical miles (NM) from land with the average kidnapping incident taking place over 60NM from land, according to IMB.

The Gulf of Guinea is a vast and diverse region stretching from Senegal to Angola, covering approximately 6,000 km of coastline.

It is an important shipping zone transporting oil and gas, as well as goods to and from central and southern Africa. On any day there are around 1,500 fishing vessels, tankers and cargo ships navigating its waters.

Incidents in the Gulf of Guinea have become dangerous, with over 80 per cent of attackers armed with guns, according to the latest IMB figures.