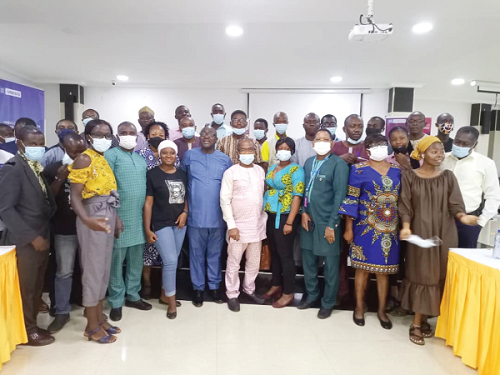 Participants and speakers at the consultative meeting on safety of journalists. In the middle is Mr Yaw Boadu-Ayeboafoh, Chairman of the NMC
30.5k Shares

The Chairman of the National Media Commission (NMC), Mr Yaw Boadu-Ayeboafoh has said the commission will strive to create a safer and more secure environment for journalism practice in the country.

That, he said, was one of the steps it was taking to halt what he described as “the impunity against the media”.

Speaking at a day's consultative meeting on the coordinated mechanism on the safety of journalists held in Tamale last Wednesday, Mr Boadu-Ayeboafoh said the initiative by the NMC would also ensure that people who attacked journalists in the course of discharging their duties, be it the military or the police, private individuals or government activists, were made to face the law to serve as a deterrent to others.

"Anybody who does anything against journalists or deliberately obstructs journalists in the discharge of their responsibilities must be brought before the law and dealt with, accordingly," he said.

That, he said, would halt the impunity against the media.

The meeting, which brought together journalists and other media persons working in the Northern and the Upper East regions, was to empower participants to recognise and appreciate their responsibilities and discharge their duties in the manner in which they were trained to do.

Before the meeting in Tamale, similar meetings and discussions had been held in Accra and Kumasi, and same will be extended to the other regions to secure the safety and security of journalists.

Mr Boadu-Ayeboafoh called on journalists and other media practitioners to cooperate with the NMC to stamp out the attacks and violence perpetrated against them and get the offenders punished, as prescribed by the laws of the country.

He cited some instances in the past where some journalists who were attacked in their line of work failed to cooperate with their employers and the NMC to deal with such issues to buttress his point.

He urged media practitioners to also work within the confines of the law and according to the ethics of their profession to build and maintain their credibility.

The UNESCO Representative in Ghana, Mr Abdourahamane Diallo, for his part, called on Ghanaian authorities to do more to create a safe environment for journalists and media institutions, as well as artistes, ensure better flow of information without risks to journalists and artistes and stop impunity by strongly sanctioning perpetrators of attacks.

He cited some recent attacks on journalists in the country as a result of their work and the line of duty to buttress his point to create a safe environment for journalists to do their work.

The Executive Secretary of the NMC, Mr George Sarpong, said the move was to create a safe environment for the practice of journalism in order to secure free expression in the country, following some emerging threats within the environment.

Each year, Paris-based Reporters Without Borders (RSF) publishes the World Press Freedom Index, which ranks 180 countries according to their media independence, transparency, acts of violence against journalists and several other criteria.

According to the latest survey, published in April 2021, journalism was seriously under threat in almost three-quarters of countries.

The report describes the situation in those places as "problematic", "bad", or "very bad".

Only 12 countries have respectable press-freedom environments, the lowest number since 2013 when the current evaluation methodology was adopted.

Between 1992 and 2021, the New York-based Committee to Protect Journalists (CPJ) said it had registered more than 1,400 journalists who were either attacked or killed in retaliation for their work.

In the 2020 index, Ghana dropped three places on the World Press Freedom Index, mainly due to threats investigative reporters face in the country.

The RSF observed that investigative reporters in Ghana were often threatened due to their jobs, as police attacks on journalists were not punished.

“Investigative reporters are often threatened, even if journalists are rarely arrested. The vast majority of cases of police aggression against journalists go unpunished and yet timid attempts have been made to combat this impunity,” it said.

The police are still trying to unravel the circumstances surrounding the death of the investigative journalist, Ahmed Suale, who was shot dead in 2019.

Suale, who worked with Tiger Eye PI, was shot twice at Madina in Accra in January 2019.

Just this week, journalists covering the trial of the General Overseer of the Glorious Word Power Ministry International, Rev. Isaac Owusu Bempah, at an Accra Circuit Court were harassed and prevented from effectively doing their job by both the police and some followers of Owusu-Bempah.