Use your status to unite people - President admonishes chiefs 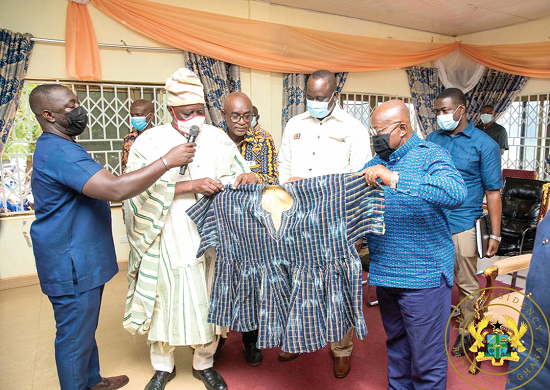 President Nana Addo Dankwa Akufo-Addo has asked chiefs to use their distinguished position in society to promote peace and unity for the accelerated development of their respective communities.

He said the government was on track in its commitment to improve the lives of the people, including infrastructural development, but said that could only be achieved in an atmosphere of peace and harmony.

The President was speaking at Lambussie in the Lambussie District where he paid a courtesy call on the Chief of the area, Kuoro Salifu Issaka Dy-Yaka, yesterday as part of activities to round off his two-day visit to the Upper West Region.

President Akufo-Addo expressed appreciation for the warm reception accorded him by the chiefs and people and gave the assurance that their grievances would be attended to in due course.

The chief congratulated the President on his victory in last year’s elections and for the creation of the district which he said would fast-track the growth of the area.

Kuoro Dy-Yaka, however, lamented that the district was the only area in the region without a hospital and, therefore, appealed to the President to consider constructing the facility to alleviate the plight of the people.

He also called for the conversion of a senior high school in the area into a boarding institution since its location was far from town, adding that some existing dams also needed to be rehabilitated.

At Nandom, President Akufo-Addo also conferred with traditional leaders at the palace of the acting President of the Nandom Traditional Council, Naa Domepreh Gyereh III.

The chief expressed appreciation to the President for support of the government to the development of Technical and Vocational Education Training (TVET), which he said had resulted in the upgrading of St. Anne’s Vocational Institute at Nandom with modern facilities for skills development.

“The people of Nandom are grateful for the development projects and programmes your leadership has provided. One of our age-long problem - roads, has also seen a massive facelift under your leadership,” Naa Gyereh added.

The Urban Roads project, which the chief also said was the brainchild of the President “has made our town beautiful, and so we say barika (thank you)”.

He further lauded the government’s effort in the completion of the Lawra-Nandom-Hamile road, adding that “we are also happy to note that the EU, through the government, is considering developing 14 deplorable farm roads. This in our estimation, will enhance agricultural activities in the district”.

“Your excellency, again we wish to extend our appreciation to you for elevating the Nandom District to municipal status which has led to improvement of services to our people,” Naa Gyereh III said.