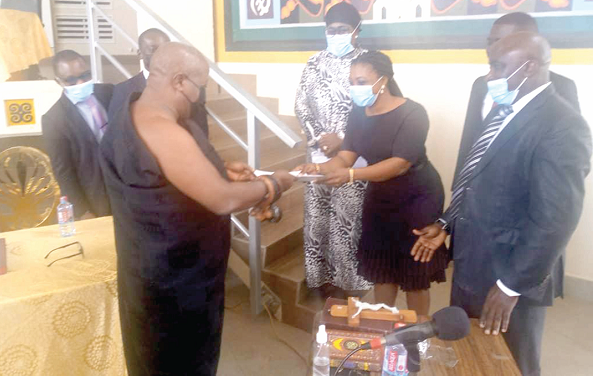 Nana Osei Kwadwo Ansebio II, the Nifahene of the Ejura Traditional Council, presenting the submission of the council to Ms Marie-Louise Simmons, Secretary of the committee

The Nifahene of the Ejura Traditional Council, Nana Osei Kwadwo Ansebio II, yesterday said the intervention of the military in the Ejura disturbances that led to the death of two persons and injury to four others was necessary to restore law and order.

He said over the years, the people of Ejura had demonstrated defiance of the police in quelling riots in the area, because of what he claimed was the lack of adequate personnel and equipment to control crowd by the law enforcement personnel.

Nana Ansebio, who appeared before the Justice Koomson Committee of Inquiry probing the June 29, 2021 Ejura disturbances, said even though the casualties recorded were unfortunate, he still maintained that the military intervention was necessary to ensure sanity.

Giving a chronology of events, the Nifahene said prior to the shooting incident, the Ejurahene, Barima Osei Hwedie II, had held a meeting with opinion leaders, including the Zongo youth and urged them to remain calm and not to resort to further violence over the attack on the social media activist, Macho Kaaka.

He said this was after the youth had vandalised a police station and other installations in town, accusing the police of not acting to arrest the alleged attackers.

The Nifahene also presented two spent bullets retrieved during the disturbances to the committee.

He said a resident of the town handed the bullet shells to the Kontihene of Ejura, Nana Odiasempa Antwi Obugyei, during the upheavals.

The Nifahene said in the afternoon of June 28, 2021 when it was announced that Kaaka had eventually died, the youth massed up and blocked roads in front of the Ejura Central Mosque and the main Ejura-Atebubu stretch and marched to the Central Business District where they allegedly destroyed public installations, including the police station, before ending up at the municipal assembly revenue checkpoint.

“Satisfied with the degree of damage caused, the mob dispersed,” he added.

And on the day of the shooting, Nana Ansebio II said the Ejurahene held a meeting with the leadership of the Zongo chiefs and youth and expressed his displeasure over their action the previous day.

He said it, therefore, came as a surprise to the traditional council that after the meeting with the Ejurahene in the morning before the burial, the youth still went ahead to demonstrate on their return from the cemetery.

The Nifahene, who was in the company of the Ejurahene, Barima Hwedie II; the Kontihene of Ejura, Nana Odiasempa Antwi Obugyei II, and a host of other members of the traditional council, said the irate youth also destroyed pavilions painted in New Patriotic Party (NPP) colours.

He further claimed that party politics had polarised Ejura such that even social events were held along party lines, saying “everything, including weddings in Ejura has some element of politics in it depending on who is organising it”.

On Saturday, June 26, 2021, Macho Kaaka was allegedly attacked by some unknown assailants in front of his house at around 1:30 a.m. and left in a critical condition.

He was later rushed to the Ejura Government Hospital where he was referred to the Okomfo Anokye Teaching Hospital on Monday, June 28, 2021 at around midday.

Following the news about his death, the youth of Ejura embarked on a demonstration on Monday which was quelled by the police with the assistance of the military.

However, on Tuesday, June 29, 2021, upon their return from the cemetery where they went to bury their compatriot, they again demonstrated, calling for justice for Kaaka.

In the process, they clashed with security personnel, leading to the death of Abdul Nasir Yussif and Muntala Mohammed.

And on July 1, 2021, the Minister for the Interior, Mr Ambrose Dery, constituted a three-member committee to investigate the shooting incident and come out with recommendations.