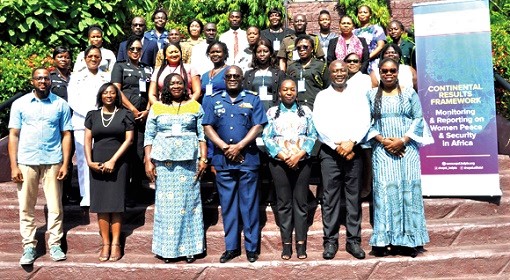 Air Commodore Arko-Dadzie (4th from left), Deputy Commandant of the KAIPTC, with some of the participants and resource persons
30.5k Shares

A training workshop on monitoring and reporting on the women peace and security (WPS) agenda, using the continental results framework, is underway in Ho in the Volta Region.

The workshop is being organised by the WPSI of the Kofi Annan International Peacekeeping Training Centre (KAIPTC) in Accra, with support from the Swedish International Development Cooperation and the Norwegian government.

Present is the Gender Monitoring Specialist, Office of the Special Envoy on Women and Peace and Security at the African Union Commission, Catherine Gaku Njeru.

The objective of the training is to enhance the skills and knowledge of the participants on WPS monitoring and reporting and for them to also understand the concept of the agenda.


Topics to be treated include introduction to women peace and security, international and regional normative framework on WPS, and WPS in Africa – regional and national action plans.

Others are data collection and analysis, reporting template and designing, preparation and implementation of national action plans, among others.

The Chief Director of the Ministry of Gender, Children and Social Protection, Dr Afisah Zakariah, in a speech read on her behalf, said even though the country was recognised as relatively peaceful, it had pockets of recurrent conflicts which had turned violent.

She said those conflicts, which revolved around chieftaincy, ethnic issues, land and politics, as well as armed robbery, had negatively impacted the peace and security of women over the years.

Dr Zakariah said gender frameworks, legislation and policies, such as the Domestic Violence Act, the Children’s Act, the Human Trafficking Act, the Justice for Children and the National Gender policies, were all meant to ensure that the peace and security of women in the country was protected.

“In times of conflict, even though men and women are adversely affected, the inequalities that exist make women, girls and persons with disabilities more vulnerable,” she said.

According to the chief director, women were the first respondents in the aftermath of conflicts, including caring for families.

“Ironically, women around the world continue to be excluded from the peace and political processes because of discrimination, social stereotyping and institutional obstacles,” she added.

Dr Zakariah said when diverse women participated in peace and negotiations, the quality and durability of peace agreements increased, and that when women were signatories to peace agreements, those agreements were more likely to be implemented.

The Deputy Commandant of the KAIPTC, Air Commodore George Arko-Dadzie, said the continental results framework was an accountability tool developed by the Office of the Special Envoy on Women, Peace and Security at the AU Commission for monitoring and reporting on the women peace and security agenda in Africa.

He expressed gratitude to the Swedish and the Norwegian governments for their support, saying it demonstrated their commitment to enhance the operationalisation of the agenda in Africa.