‘Sweet and sour’ in Eastern Region 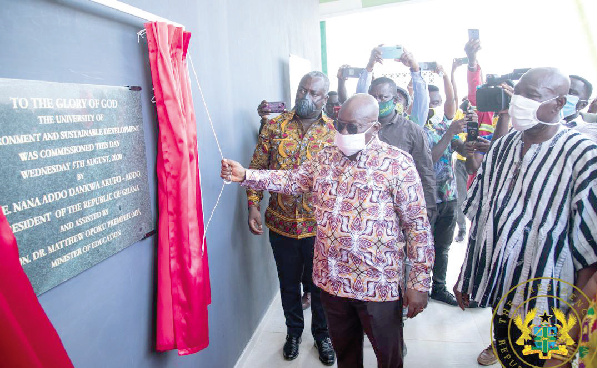 FLASHBACK: President Akufo-Addo unveiling the plaque to inaugurate the University of Environment and Sustainable Development at Somanya Follow @Graphicgh

Mixed developments in the form of infrastructure projects and disasters presented a sweet and sour situation in the Eastern Region in 2020.

The region witnessed appreciable development one of which was the completion of the Suhum overpass, a project which stalled for many years and was revived by the present government and inaugurated by President Nana Addo Dankwa Akufo-Addo.

The completion of the project reduced accidents around the Suhum roundabout.

Another project was the completion and inauguration of the University of Environment and Sustainable Development at Somanya.

The university is expected to admit its first batch of students next year.

Also completed was the model science Senior High School, a facility which the people of the region are proud of.

On health, a sod was cut for the construction of a 600-bed regional hospital at Akwadum to serve as a referral hospital.

Currently, the Koforidua Central Hospital is the major referral facility. In addition to this, selected districts are also benefiting from a 100-bed capacity hospitals.

In order to make power available at all times, the Electricity Company of Ghana  (ECG) commissioned a primary sub-station at Mpraeso to serve communities on the Kwahu Ridge and the Afram Plains.

The GH¢66 million project was to end the frequent power outages in the area.

It would at the same time afford the ECG to link the various feeders into a ring on the Kwahu Ridge to ensure system flexibility.

On politics, the New Patriotic Party (NPP) lost the Ayensuano Constituency for the first time since 1996 to the NDC. In addition, the party lost the Akwatia seat to the NDC.

The NDC also lost the Upper West Akyem which has been in its domain since 1992 to the NPP.

The region witnessed a disaster that brought shock waves across the country in October.

At Akyem Batabi, 22 people lost their lives when a five storey building of the Church of Prosperity collapsed on worshippers.

Just before Christmas, seven stores were gutted by fire in the Koforidua Central Business District (KCBD) which led to loss of property running into thousands of Ghana cedis.

There were series of road accidents especially on the Accra-Kumasi highway leading to deaths and injuries.

Most of the accidents were attributed to speeding by drivers and fatigue.