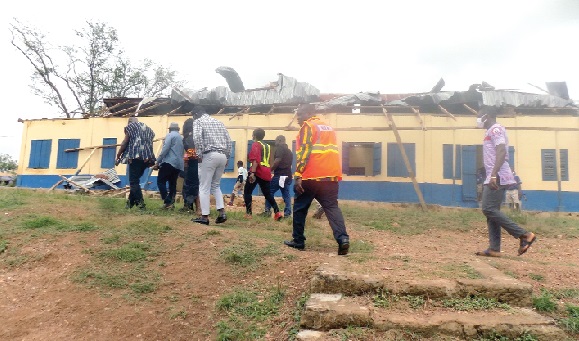 A rainstorm which hit Akyem Oda in the Birim Central Municipality in the Eastern Region last Monday and destroyed more than 300 dwellings, as well as buildings belonging to 10 educational institutions, has been described as the worst to hit the municipality in recent times.

The rainstorm lasted about two hours, following which over 1,000 people were rendered homeless and property worth millions of cedis destroyed.

Others were school registers and log books, electric poles and cables and metal containers.

Victims of the disaster are, at the moment, putting up with relatives, friends and benefactors.

The roof of the palace of the Omanhene of the Akyem Kotoku Traditional Area and those of the Presbyterian, Anglican and Pentecost churches were ripped off in the downpour.

The educational institution affected most was the Oda Attafuah Senior High School (SHS), which had the roofs of both boys’ and girls’ dormitory blocks, classroom blocks and the administration building and library all blown away.

Also not spared was the headmaster’s bungalow and those of some of the tutors in the school.

The other schools affected in the storm were the Presbyterian Primary ‘A’ and ‘C’, the Oda Anglican Kindergarten and Primary School, the Oda PWD Camp Roman Catholic Primary School, A.E.A. and Mizziz B International School.

Twelve students of the Attafuah SHS who got injured in the disaster were rushed to the Oda Government Hospital for treatment.

The Member of Parliament (MP) for Akyem Oda, Mr Alexander Akwasi Acquah, accompanied by the Birim Central Municipal Chief Executive (MCE), Ms Victoria Adu, visited victims of the disaster to commiserate with them.

They also went round the municipality and inspected the extent of damage to homes, installations and institutions.

Also on a tour of the municipality were staff of the National Disaster Management Organisation (NADMO) in the Birim Central municipality.

Mr Acquah assured victims that a report had been made to NADMO Headquarters and was hopeful help would arrive soon.

He promised to personally assist the victims in his own way.

The Akyem Oda MP was concerned about the way more than 20 locally made galvanised containers were easily blown away in the storm because they were not securely fixed.

Mr Acquah appealed to the Forestry Commission to reconsider planting trees that could withstand heavy rains along the major roads and streets in the municipality since those planted originally were uprooted in the storm.

He commended the students of the Attafuah SHS who, after the rains, collected their wet library books and dried them, for their high sense of patriotism.

Ms Adu, for her part, urged the students not to be disturbed by the disaster and encouraged them to take their studies seriously.