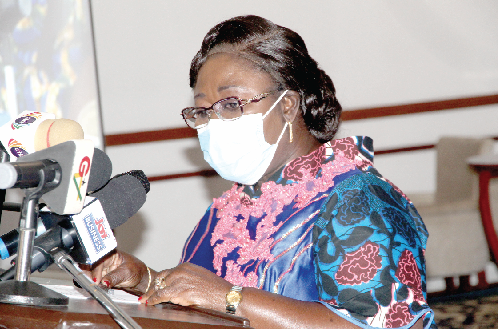 An initiative to ensure effective revenue mobilisation and the prevention of financial leakages has been launched in Accra.

Known as Revenue Assurance and Compliance Enforcement (RACE), the multi-agency programme is to reinforce the culture of compliance, especially in areas such as petroleum bunkering, gold and minerals export, port operations, transit goods, warehousing and free zones operations.

The Vice-President, Dr Mahamudu Bawumia, who launched RACE in Accra yesterday, described the initiative “as the last line of defence in revenue mobilisation” and said it would power the efforts of the government to stay the course in achieving economic targets for fiscal sustainability by 2024.

He said it would also pave the way to reset Ghana’s resource mobilisation framework to challenge itself to new heights in public finances, even as the economy strongly rebounded from the devastation of the COVID-19 pandemic.

According to the Vice-President, the timing of the implementation of the RACE initiative hinged on the back of the integration of diverse databases, such as the Ghana Card, tax identification numbers (TINs), the digital address system, the Passport Office and the Driver and Vehicle Licencing Authority (DVLA).

Recounting the outcome of a survey carried out in 1998 and 1999 by the Ghana Statistical Service (GSS) which gave some indication as to who was paying taxes in the country, Dr Bawumia said “the survey found that the percentage of employees who had taxes deducted from their pay at source ranged from a high of 92 per cent of those in the mining sector to 77 per cent in the financial sector; 45 per cent in manufacturing to a low of 25 per cent in the construction industry”.

On occupational classification, he said the highest compliance rate was among those who worked in administrative and managerial positions, professional and technical skills jobs and those in clerical jobs, with the least tax compliant being those who worked in occupations that involved service delivery, sales, transport and construction tradesmen, in that order.

He said non-compliance meant denying the public purse significant amounts of revenue, while tax avoidance and evasion schemes undermined public trust in the integrity and fairness of the tax system.

“This is the scale of the challenge we have to confront and the scope of the potential we have to harness. The implementation of the RACE initiative is one of our responses to this challenge and opportunity,” Dr Bawumia said.

On mobile application of taxes to simplify the process, he said the Ministry of Finance and the Commissioner-General of the GRA, in collaboration with the Economic Management Team (EMT), had initiated work on a mobile application for the filing of taxes, which would be ready by the end of October this year.

“The idea is to have a mobile app where an individual or enterprise will input some pieces of information and the tax due will automatically be calculated for you to pay with your phone and receive a receipt immediately,” Dr Bawumia added.

A Deputy Minister of Finance, Ms Abena Osei Asare, said her outfit was rolling out strategic interventions such as RACE to attain a higher degree of assurance.

She said shortfalls in revenue mobilisation had been a long-standing challenge and that “RACE will sustain the base of tax payment to enable the government to identify revenue leakages”.

The Commissioner-General of the GRA, Rev. Ammishaddai Owusu-Amoah, said effective collaboration among tax agencies and stakeholders was important in achieving targets.

For his part, the National Security Coordinator, Major General Francis Adu Amoafo, said the initiative was a step towards strengthening the peace, security and stability of the country.