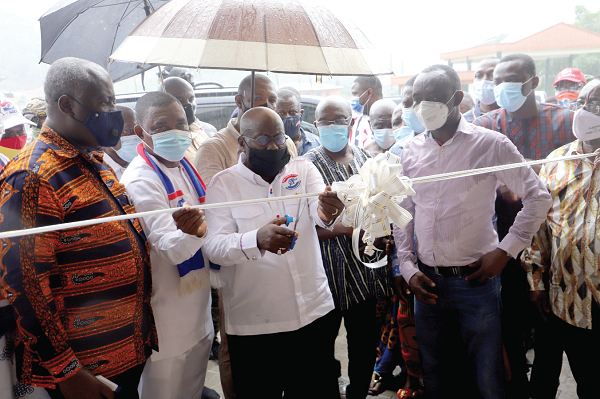 President Nana Addo Dankwa Akufo-Addo has inaugurated two educational projects on the Tarkwa Campus of the University of Mines and Technology (UMaT) in the Western Region.

The completed projects are a five-storey Administration Block and a building housing the Ghana National Petroleum Corporation (GNPC) School of Petroleum Studies.

The School of Petroleum Studies was funded by the GNPC at a cost of GH¢12 million.

It has a well-furnished science laboratory.

It was established in fulfilment of the GNPC’s determination to develop local capacity for Ghana’s petroleum sector as a means to maximise returns.

Explaining the rationale behind the sponsorship deal, the Chief Executive of the GNPC, Dr K. K. Sarpong, said the corporation was inspired by the President’s ideal of a Ghana Beyond Aid and was taking steps towards making that a reality in the petroleum sector.

“We recognise that key to achieving that model is to make sure that our institutions of higher learning are producing the requisite human resource, not just for the corporation but also the industry in general. And that can only happen through research and collaboration between industry and academia,” he said.

He said the GNPC had also been exerting extra effort “to bridge the human resource capacity gaps along the petroleum industry value chain”.

The Vice-Chancellor of UMaT, Prof. R. K. Amankwaah, expressed his gratitude to the GNPC for the project and also to the President for honouring the invitation to inaugurate the buildings.

He said the university would wholeheartedly ensure that the structures were maintained regularly.

The GNPC School of Petroleum Studies has spaces for laboratories, lecture halls, lecturers’ offices and offices for administrative staff.

As part of initiatives to ensure that Ghanaians take commanding heights in the oil and gas sector, the GNPC has set up four Professorial Chairs in the University of Ghana, Legon, the Kwame Nkrumah University of Science and Technology (KNUST) in Kumasi, the University of Cape Coast (UCC) and the UMaT.

The Professorial Chairs were set up in 2017 to help develop expertise and knowledge in the petroleum sector.

The chairs are mainly research-based and are expected to specialise in various aspects of the petrochemical business, with the objective of building local capacity and retaining much-needed resources in Ghana.

President Akufo-Addo later addressed a mammoth rally in Tarkwa, where he said his administration had used its first term to lay a good foundation for the country’s take-off, and that the next term of the NPP government would see it construct the superstructure to usher in more prosperity, progress and development for the nation.

He explained that the government’s policies, such as free senior high school (SHS), which has increased enrolment in SHSs; Planting for Food and Jobs, which has transformed Ghana into a net food exporter, and the One-district, One-factory, which has improved the nation’s self-sufficiency and self-dependency, had  had positive impacts on the lives and livelihoods of the people.

“I am coming to work with Mireku Duker in Parliament. He has not let you down since you sent him to Parliament. He is working hard there and is one of the highly respected MPs in the House,” he said.