President cuts sod for work to commence on Dome-Kitase Road 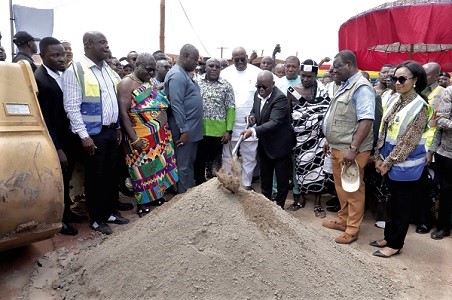 President Nana Addo Dankwa Akufo-Addo has cut the sod for work to commence on the 23-kilometre Dome-Kitase road which serves as an alternative route linking the Greater Accra and the Eastern regions.

The road, which connects the Accra-Kumasi road to the Accra-Aburi-Koforidua road and also to the Ashesi University, is being funded by the government of Ghana and the Kuwaiti Fund at an estimated cost of $35 million.

It is being constructed by a Ghanaian construction firm, First Sky Construction Limited, and it is expected to be completed within 24 months.

President Akufo-Addo expressed delight that the rehabilitation of the Dome-Kitase road was finally being undertaken under his Presidency, saying the construction of the road had been the subject of promises made by various political parties and successive governments.

“This and many other road projects across the country are in line with the government’s agenda to provide quality road infrastructure to help accelerate the economic development of the country,” he stressed.

Highlighting some of the road projects undertaken during his tenure, the President mentioned the construction of 100 kilometres of roads and ancillary infrastructure under the Kumasi Inner Ring Road and adjacent streets projects.

Under those projects, he catalogued roads at Nhyiaeso, Bantama, Oforikrom, Manhyia, Subin, Tafo, Pankrono, Asokwa, Suame and Kwadaso, which he said, had been constructed.

In addition to those, President Akufo-Addo said work was ongoing on the second 100km Kumasi Inner City road project which was currently 10 per cent complete, while the dualisation of the Tema-Aflao road, including the construction of interchanges at Kpone, Savannah, Dawhenya and Prampram, was also ongoing.

Throwing more light on the Tema Beach Road project, he explained that the project involved the expansion of the road from the Independence Square to Nungua, which is 38 per cent complete.

He added that Lot Two, which is the widening of the beach road to Nungua and Tema, including the construction of a three-tier interchange at Nungua, was 60 per cent complete.

Furthermore, he said, the upgrading of the 15.4km Ofankor-Nsawam road into a 10-lane facility, including the erection of interchanges at Amasaman, Pobiman, Medie and Nsawam, had just commenced, while asphaltic overlay works throughout the country were also ongoing.

The Minister of Roads and Highways, Kwasi Amoako-Atta, said provision had been made for drainage facilities along the Dome-Kitase Road, including roadside drainage systems and culverts.

The drainage systems, according to him, had been designed to allow for factors on climate change to ensure that the systems were resilient and the road would not flood during rains.

“Walk ways have also been provided in the urbanised section of the entire road. Adequate provision for public transport facilities, such as walk ways, has been made to improve safety on the road.

“Line markings and signs have been incorporated, as well as provision of street lights on the stretch,” Mr Amoako-Atta indicated.

The Greater Accra Regional Minister, Henry Quartey, for his part, said Accra, the national capital, had a high level of inter-urban accessibility and it was pertinent to continuously enhance connectivity to improve mobility to facilitate economic activities and improve the livelihoods of the people.

He said it was also refreshing that the route, which serves as an alternative route to the Akuapim enclave and one of the prestigious universities in the country, Ashesi University, was going to be rehabilitated.