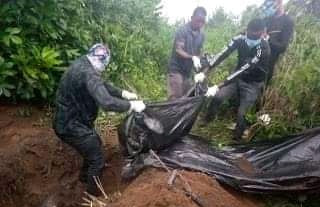 A 65-old-woman has been murdered on the Assin Ntenkyemi footpath near Assin Bereku in the Central Region.

Police found the butchered two halves of Ama Baduaa without the head buried in two shallow graves about 20 levels apart.

The head of the deceased has not been found.

The incident has thrown the area into a state of shock and fear.

Police say they have commenced investigations into the gruesome murder to find the perpetrator(s).

The Central Regional Police Public Relations Officer, Deputy Superintendent of Police (DSP) Mrs Irene Oppong, told the media that police received information about the discovered body of the deceased, Ama Baduaa, on August 16, 2021 at about 4:20 p.m.

DSP Mrs Oppong said police personnel, together with the District Chief Executive for Assin North, Mr Charles Ohene Andoh, and some elders of the town went to the scene at the outskirts of the Assin Bereku township about one kilometre from the Assin Ntenkyemi footpath.

She said the police were led to a spot about 26 metres from the footpath into a nearby bush where they found a spot disturbed and a fresh grave.

She said some body parts suspected to be human liver was found at the spot and a human upper part, from the abdomen to the head, was seen buried in the shallow grave together with her clothes.

DSP Oppong said there was another shallow grave about 20 metres away where the police found the lower part (from the abdomen to the legs) also buried.

She said a basin containing some plantain sucker, maize, a machete and a red scarf believed to be the deceased’s was also found about 20 metres away from the where the body was found.

She said the son of the deceased, one Kojo Ackah, identified her as his mother.

The body has been deposited at the St Francis Xavier Hospital for preservation and autopsy.