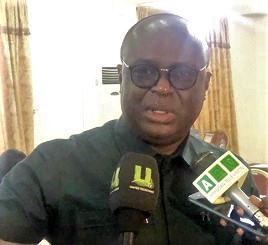 A one-day seminar to update stakeholders on the progress made so far on the preparation of the Food System Resilience Project (FSRP) ended in Koforidua, the Eastern Regional capital, last Wednesday.

The seminar, which was organised by the Ministry of Food and Agriculture (MoFA) with funding from the World Bank, was attended by about 40 representatives from MoFA, Ministry of Finance, Centre for Scientific and Industrial Research (CSIR), Crop Engineering and Research Institutions, among others.

Addressing the participants, the Coordinator of the Food System and Resilience Project (FSRP), Osei Owusu-Agyeman, said the MoFA and the World Bank mandated the Project Implementation Unit (PIU) of the Ghana Commercial Agriculture Project (GCAP) to lead the preparation of the FSRP.

He said the project team, therefore, solicited for inputs with follow up visits to most of the relevant institutions across the country to gain a better understanding of the constraints and gaps needed by the project to improve food resilience in Ghana and the sub-region.

Mr Owusu-Agyeman explained that the project ensured that its objectives and strategies aligned with the government flagship programme, Planting for Food and Jobs (PFJ), which was undoubtedly one of the most innovative and comprehensive agricultural programmes introduced in the country.

He indicated that the project sought to leverage technology in building the capacity of farmers and other value chain actors to be resilient in the face of inevitable global environmental challenges such as drought, desertification, flooding, pest and diseases as well as population growth.

For example, Mr Owusu-Agyeman noted that the project intended to assist the Genetic Resource Research Institute (PGRR) of the CSIR to effectively perform its functions as a national gene bank.

He, therefore, stated that the project would work with all beneficiary institutions to ensure that infrastructure, systems and capacity funded by it was sustained.

Technical Committees, Mr Owusu-Agyeman stressed, would be formed at the national level to facilitate the implementation of the project while at the zonal level, the technical committee would include implementing partners and the local government agencies.