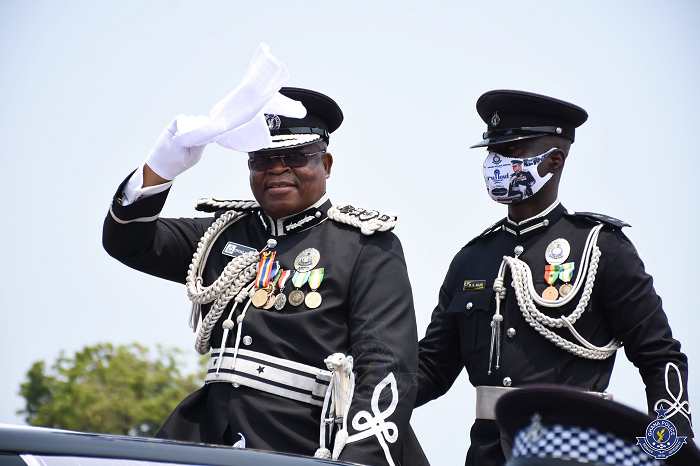 The outgoing Inspector General of Police (IGP), Mr James Oppong-Boanuh, has called on personnel of the Ghana Police Service and Ghanaians in general to give the acting IGP, Dr George Akuffo Dampare, the necessary support to maintain law and order in the country.

Ghanaians, he said, needed nothing but a peaceful environment for economic development and improved livelihood.

"In this era of the emergence of sophisticated crimes, perpetrated by a network of organised criminal gangs, the new acting IGP can only succeed when he is accorded the requisite support by all and sundry," Mr Oppong-Boanuh said yesterday at a farewell and pull-out ceremony for him at the National Police Training School at Tesano in Accra.

Prior to that, he held the position of acting IGP from July 2, 2019, after leaving his previous position of a Deputy IGP which he held from 2018. 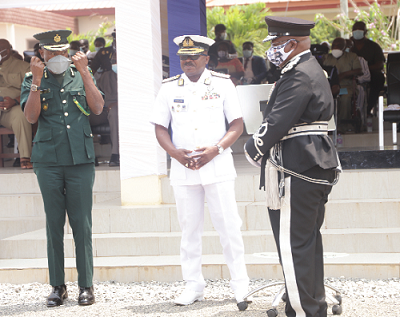 Mr Oppong-Boanuh’s police career started on August 1, 1988 when he joined the service as a legal professional.

A citation from the Ghana Police Service stated in part: “Your 33 years of dedicated and selfless service to the country has been exceptional and the police administration appreciates it.

“You work hard serving in different capacities as a police officer and in the highest office of the Inspector General of Police.”

Mr Oppong-Boanuh later presented a flag of the Ghana Police Service to Dr Dampare as a symbol of authority.

He reviewed a parade from a contingent that included the Mounted Squadron.

He was also given three happy cheers by the contingent on parade.

Present at the event were Ministers of State including the Minister for the Interior, Mr Ambrose Dery, and the Chief of the Defence Staff, Rear Admiral Seth Amoama.

Mr Oppong-Boanuh said he was leaving the scene at the time the country had been ranked on the 2021 Global Peace Index Report as the second most peaceful country in the sub-Saharan region behind Mauritius.

“It is important to underline that the role of the security agencies, which is internally led by the police service, cannot be over emphasised. In the midst of resource constraints and other organisational challenges, we have supported our dear country to achieve this global accolade,” he said.

“I believe that we can do more to become one of the most peaceful countries in the world with the right leadership and policies and regular support to the service,” he added.

Mr Oppong-Boanuh said the police service had undergone significant changes over the years, which had roots in hard work, commitment, dedication and perseverance from a number of personnel who sometimes defied the odds and sacrificed their limit.

He urged the acting IGP and the entire leadership of the service to unite and forge ahead for the good of the service and the country since it was only in unity that he would be able to achieve the core mandate of the service.

“The strategic direction of the service is at your disposal and I urge you to formulate policies which would inure to the benefit of the personnel and the good people of the country. I also wish to advise up and coming leaders to stay focused and committed to the cause of the service,” he said.

Mr Oppong-Boanuh thanked God for the 33 years he served as a police officer and for crowning his career with the highest office of IGP.

He expressed his gratitude to President Akufo-Addo for giving him the opportunity to serve as the leader of the Ghana Police Service from July 2019.

He also commended the Vice-President, Dr Mahamudu Bawumia, for his immense support during his tenure as IGP.

“My appreciation will not be complete without rendering sincere thanks to the sector minister, Mr Ambrose Dery, the Chief Director of the Ministry for the Interior, heads of the other security agencies, members of the Police Management Board and the entire members of the police service and my family for the support you gave me during my tenure,” he said.

Mr Oppong-Boanuh said he was bowing out with pride and avowed conviction that the service was blessed with a number of hardworking and committed officers who were going to support the incoming IGP to continue from where he left.

He said his professional path to the present day had not been rosy as it had been characterised by a number of turbulent experiences and some fond memories but through it all, God granted him the necessary guidance and wisdom to navigate around them.

In a short exhortation, the Chaplain General of the Ghana Police Service, DCOP Very Rev. Fr. George Arthur, charged personnel to critically examine, evaluate and build up the police service, adding that “let us think about the future of the service in all your considerations”.

“Mr James Oppong-Boanuh, the service will surely approach you for your expertise and experiential advice when the need arises,” he stated.