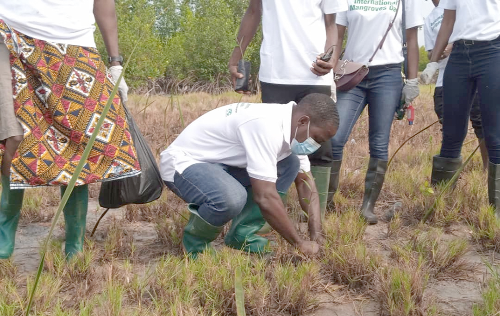 Stakolders from the Forestry Commission, IUCN, some members of the communities planting trees at the Atiteti mangrove site

The government has been urged to consider acquiring portions of mangrove areas for conservation to help protect the ecosystem of the country.

The appeal follows concerns by the Forestry Commission (FC) and other key stakeholders, including the International Union for Conservation of Nature (IUCN), about the fast pace at which the country is losing its mangroves.

According to the Wetlands Operation Manager of the FC, Mr Dickson Agyeman, the alarming rate at which the mangroves, mostly found in the Songor, Anlo-Keta lagoons, were depleting could hamper efforts being put in place to manage climate change.

In an interview with the Daily Graphic on the sidelines of the celebration of 2021 World Mangrove Day at Anyanui last Monday, Mr Agyeman said it was high time the country considered sustainable ways of managing and conserving mangroves for future use.

Mangroves contribute significantly to the wellbeing, food security and livelihood of coastal communities.

But the indiscriminate cutting and over harvesting of mangroves, he noted, was hurting the ecosystems.

"Government should acquire some areas of mangroves and turn them into conservation areas under the law to promote eco-tourism, serve as a gene pool where we can get varieties of mangrove seeds,” Mr Agyeman recommended.

He, however, acknowledged that this could not be done without vigorous advocacy to conscientise communities within the enclave on the importance of mangroves to the ecosystem and also fight against climate change as well as finding them alternative sources of livelihood.

On the importance of mangroves, he indicated that they were plants that had the capacity to absorb carbon-dioxide from the system to free the country from the effects of climate change.

He observed that many of the mangrove areas were being depleted without any effort to re-plant the mangroves.

"This is not good for the country. If we want to deal with climate change, we have to save our mangroves. Our mangrove areas are vulnerable. Meanwhile, mangroves concentrate carbons higher than any forest area and so very unique and must be protected," he stated.

He said though government did not have much power over the management of mangroves because the land was not state owned, it could lawfully acquire the land and ensure that such areas could be well protected for future generations.

The celebration this year which was on the theme: "Mangroves, our lifeline, our livelihoods", brought together partners such as Wildlife Division of Forestry Commission, IUCN, Development Institute, chiefs and queen mothers within the enclave as well as the representatives of government ministries and departments to mark the day.

The Project Coordinator for IUCN, Ms Saadia Bobtoya Owusu-Amofah, said her outfit, with its special interest in mangrove preservation, was implementing a four-year project aimed at an integrated protection of the diversity and fragile ecosystems of mangroves in West Africa and their enhanced resilience to climate change.

The project is being implemented in partnership with Wetlands International Africa, Eclosio and IUCN in four priority conservation landscapes across West Africa including mono Volta made up of Ghana, Benin and Togo. The Mono-Volta landscape encompasses the Songor and the Anlo-Keta lagoons in Ghana.

The project coordinator said it was the hope of IUCN that by the end of the project, "We can restore our mangrove ecosystems and regain what has been lost" and also reignite commitments and concerted efforts towards curbing the numerous challenges that hamper the effective management of Ghana's mangrove.

The occasion was also marked with the planting of about 2,000 mangroves to refill the depleted areas at the Atiteti community.

Meanwhile, some members of the communities in the Mono-Volta area have said that they will resist any attempt to stop them from harvesting the mangroves without alternative livelihood as it is their only source of existence.

Their complaint, according to them, was based on the fact that most of the times when decisions of such nature were taken, decision-makers did not involve them and went on to implement whatever project was at hand.

The Agbotadua (linguist) of the Dzita community, Ahevi, said they were development-oriented people and as such were not in any way challenging any decisions that would positively impact their environment such as the preservation of mangroves in their area.

However, "we will also not be coerced into accepting decisions that may affect our very means of existence," he said.

The Agbotadua said they were ready to collaborate in any effort aimed at sustaining the ecosystem, including the replanting of mangroves when they were cut.

"We know the importance of mangroves to the existence of man and in our own way we would continue to protect its sustainability as well," he pledged.

The Anlo-Keta lagoon complex offshore mangrove site covers an area of 530km sq and has a coastal stretch of 40 km considered to be the largest in Ghana.