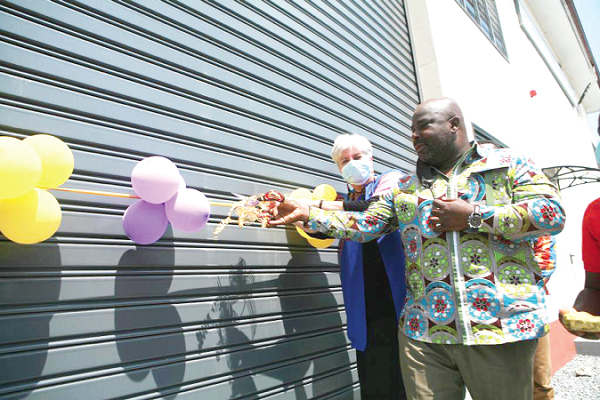 Ms Stephanie Sullivan, the Ambassador of the United States to Ghana, and Mr Michael Okyere Baafi, a Deputy Minister of Trade, cutting a ribbon to officially open the air-conditioning and refrigerator test laboratory in Accra

The Millennium Development Authority (MiDA) has handed over an air-conditioning and refrigerator testing laboratory to the Ghana Standards Authority (GSA).

Considered to be the first such testing facility in West Africa, the $1.8-million laboratory will enable the GSA to test and ensure that all air-conditioners and refrigerators imported into Ghana meet the minimum energy performance standard (MEPS) set out in the Energy Commission’s Energy Efficiency Regulations.

The laboratory is equipped with a Balanced Ambient Room Calorimeter (BARO), a test chamber for the evaluation of the capacity and performance of Room Ambient Calorimeters (RACs) compliant with the ISO 5151 standards.

This will ensure that only approved energy efficient cooling appliances are allowed into the market.

It is also expected to improve the regulatory activities of the GSA, which now has various test parameters at its disposal.

A short ceremony was held at the Head Office of the GSA in Accra yesterday to inaugurate the facility, which is supported by the United States government as one of four major projects which make up the $316-million Ghana Power Compact Programme.

The programme, which is part of the Energy Efficiency and Demand Side Management (EEDSM) Project, is supporting a number of policy initiatives and interventions aimed at ensuring energy efficiency and conservation of the available energy capacity.

The Minister of Trade and Industry, Mr Alan K. Kyerematen, in a speech read on his behalf by one of his deputies, Mr Michael Okyere Baafi, commended the US government for supporting Ghana under the Ghana Power Compact project and other diverse ways.

Air-conditioners and refrigeration appliances, he said, were high energy consuming appliances, and as such the establishment of the test laboratory would support Ghana's energy efficiency agenda.

The facility, he pointed out, would support the government’s efforts towards implementing a national programme to enforce performance labelling of ductless room air-conditioning systems, also known as RAC Systems in the country.

"This is part of the government's policy and commitment to energy sufficiency and promotion of renewable energy sources and energy efficiency,” he said.

"This laboratory will put Ghana in a leadership position, helping to enforce strong efficiency standards, reduce emissions and save Ghanaians money,” she said.

She advised that the facility be put to good use and maintained to benefit future generations.

An official of the Ghana Standards Authority explaining how some of the testing machines in the air-conditioning and refrigerator test laboratory work to Ms Stephanie Sullivan, the Ambassador of the United States to Ghana, and Mr Michael Okyere Baafi.

The Board Chairperson of the GSA, Professor F. C. Mills Robertson, said the GSA would soon introduce the Import Certification Scheme, which would ensure that high-risk goods, including air-conditioners and refrigeration appliances, which were high energy consuming appliances, were prevented from coming into the country if they did not meet the required standards.

The facility, he said, would help the GSA augment the work of the Energy Commission in enforcing Ghana’s Import Certification Scheme.

Following the commissioning of the A-C and refrigeration testing laboratory, Prof. Robertson expressed the confidence that the Energy

Efficiency Appliance Standards and Labelling Regime being undertaken by the Energy Commission would be given a boost and help conserve energy in the country.

The Chief Executive Officer of MiDA, Mr Martin Eson-Benjamin, who spoke on behalf of the MiDA Board Chairperson, Prof. Yaa Ntiamoa-Baidu, said the laboratory would help reduce the high energy demand and usage of power on the national electricity grid.

He said it would also improve customer confidence in the items they purchased.