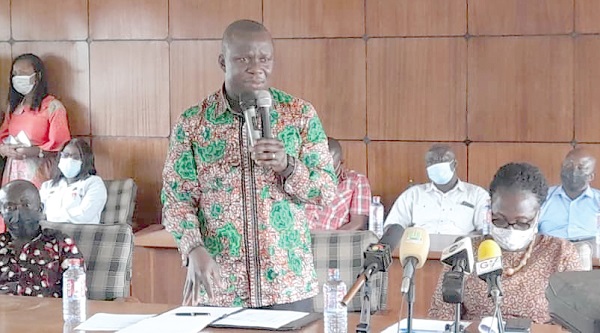 With sophisticated weapons, the cartels — said to be made up of both Ghanaian and foreign nationals — have destroyed some forest reserves.

The minister, therefore, appealed to chiefs and other community leaders to assist the Bono East Regional Security Council (REGSEC) and the Forestry Commission officials to stop those activities.

Mr Jinapor was interacting with members of the Bono East House of Chiefs during a tour to solicit support from the people to protect the country’s natural resources.

The minister explained that logs harvested illegally from the Bono and Ahafo regions were sold in Techiman, capital of the Bono East Region, and transported to neighbouring countries such as Burkina Faso, Mali and Niger.

Mr Jinapor said there had been incidents of attacks on forestry officials performing their duties by people who illegally cut trees from both forest reserves and farmlands.

“I am, therefore, here to solicit your support since I cannot do it alone,” he stated and assured the chiefs that some of them would be included in a task force that would be formed to put a stop to activities of the illegal lumbering cartels.

Mr Jinapor said after holding a meeting with members of the REGSEC, “we have resolved to form a task force to make sure that the rich resources of the region are protected”.

He said the Bono, Bono East and Ahafo regions, which had forest reserves, served as the transitional zone and everything possible should be done to protect those reserves so that the country would not be overwhelmed by the fast-approaching Sahara Desert.

Mr Jinapor said nobody without a permit was allowed to cut trees even on his own land, and, therefore, asked the chiefs to question people who came to their area to harvest trees whether they had the permit to do so.

The President of the Bono East Regional House of Chiefs, Pimampim Yaw Kagbrese, said even though little was known about illegal mining in the region, there was the need for measures to ensure that activities of the few were stopped before they were extended to other areas.

“We are happy about your resolve to fight illegal logging and we are prepared to team up with you to protect our natural resources for the sake of posterity,” he added.

Pimampim Kagbrese said there was evidence of the availability of gold and oil in the area, and called on the government to team up with investors to prospect to verify whether it was commercially viable to extract the resources to provide employment for the teeming youth in the area.

The Bono East Regional Minister, Mr Kwasi Adu-Gyan, expressed concern about the indiscriminate felling of trees for commercial production of charcoal in some parts of the region and stated that measures had to be adopted to control such activities to save the environment.