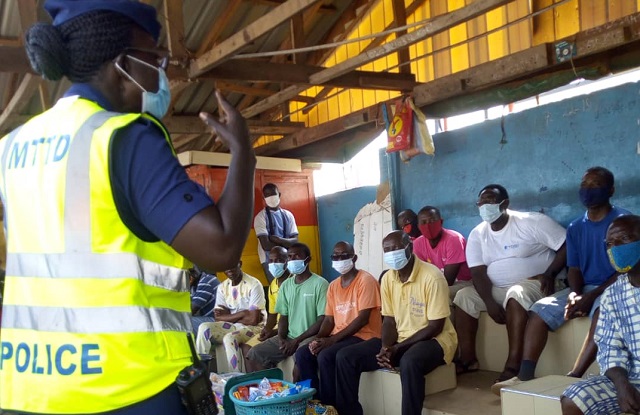 The Kpeshie Divisional Motor Traffic and Transport Department (MTTD) at Nungua in Accra has stepped up efforts to sensitise and educate motorists and pedestrians on road traffic regulations to ensure an accident-free festive season at Teshie, Nungua and surrounding communities.

The MTTD command has also increased police visibility on the main Teshie-Nungua-Tema beach road and other busy routes within the area to enforce the law and forestall vehicular congestion.

In line with its sensitisation agenda, the MTTD command in collaboration with the National Road Safety Authority (NRSA) has since Thursday been visiting some bus terminals and streets within Teshie and Nungua to educate drivers and pedestrians on safety issues.

The collaboration is part of a campaign dubbed “Arrive Alive” which is targeted at reducing road crashes during the Christmas festivities.

Sensitisation
Led by the Kpeshie Divisional MTTD Commander, Deputy Superintendent of Police (DSP) Mrs Stella Ewool, the team on Thursday visited selected bus terminals in Teshie and Nungua where they spoke to commercial drivers on safety practices and the need for them to exercise discipline on the road.

At each of the terminals, DSP Ewool entreated the drivers to be mindful of their own safety and that of other road users by respecting road signs, constantly wearing seatbelts, avoiding speeding and inappropriate manoeuvring among other practices.

She also implored pedestrians to “be responsible for their own safety” by avoiding jaywalking and desisting from boarding vehicles at unauthorised points.

“If we just do the right thing, our roads will be safe for all of us. We are going to do our part but the bigger responsibility lies on you. Avoid reckless driving, don’t drink and drive, obey the traffic regulations and take rest when you are tired,” she advised.

Enforcement
In an interview after Thursday’s sensitisation, DSP Ewool served notice that the police would strictly enforce the law to aid compliance on the part of motorists.

She revealed that the MTTD command has deployed more officers on the streets to check the activities of motorists and ensure free flow of traffic.

“Now instead of two schedules of our duty, we have now made it three schedules. This means that our men will be on the road in the morning, afternoon and evening because of the season. My expectation is that the drivers and pedestrians will put what we have told them into practice to reduce or prevent road crashes”, she said.

An Assistant Planning Manager at the Greater Accra regional wing of the NSRA, Ms Ewura Esi Acquah urged drivers to “do the right thing on the road” at all times. She also appealed to the police to enforce the law to ensure full compliance.