Accra: Tricycle kills pedestrian at Adentan, rider on the run 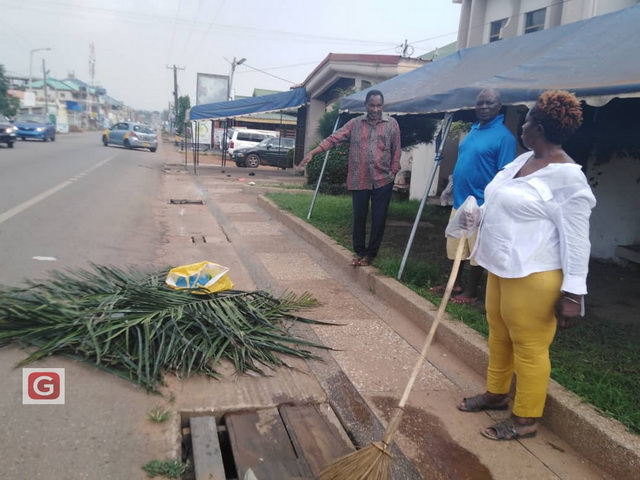 The body of the victim is covered with palm fronds
30.5k Shares

A refrigerator repairer met his untimely death Saturday afternoon when an Apsonic tricycle, in an attempt to overtake a vehicle knocked him down near the Aprotech Junction along the Adentan Barrier-Housing Down Road.

The man believed to be in his early 30s died on the spot. The body has been deposited at the Police Hospital mortuary.

The tricycle, which was conveying a bull and a sheep was said to have lost control while attempting to overtake and hit the victim.

The rider managed to escape arrest and is on the run.

When the Graphic Online visited the scene of the accident, the owner of a house in front of which the accident occurred, Mr and Mrs Ofori were spotted using disinfectants to clean the bloodied frontage of the house.

They were worried the blood stains would dry up, a situation they did not want to occur.

The MCE of the Adentan Municipal Assembly, Mr Daniel Nii Noi Adumuah who was at the spot of the accident when Graphic Online got to the scene, expressed shock at the accident, explaining that he received a call that a tricycle had killed a pedestrian in the area.

He expressed sadness at the level of indiscipline among the motoring public, saying that the way motorist sped on the road was unacceptable.

Mr Adumuah urged Ghanaians to condemn acts of lawlessness and not condone such acts because of affiliation of any kind.

The Adentan MTTU confirmed the accident, explaining that they had information of a fatal accident and “when we got there, the lifeless body of the man was lying in a pool of blood,” an officer at the station told Graphic Online.

At the MTTU, the family of the deceased who were yet to know the state of their relative waited anxiously as the police only told them a team had taken the man to the hospital and so, they should wait for information from the team.

Currently, the tricycle, the bull and the goats are at the Adentan MTTU.