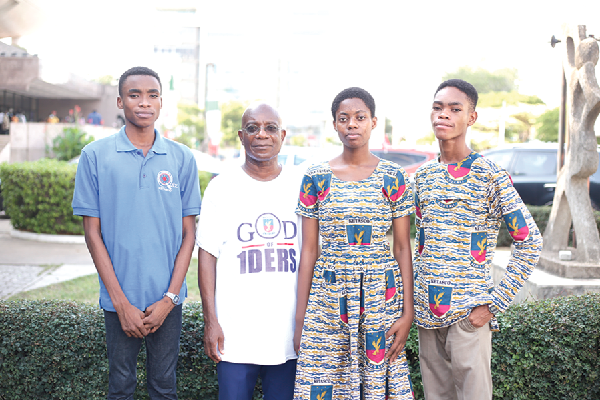 The Keta Senior High Technical School (KETASCO) Old Students Association has organised a dinner for the students who represented the school at the 2021 National Science and Maths Quiz (NSMQ) to celebrate their outstanding performance.

KETASCO braved all the odds and made a name for itself as one of the successful schools in the competition, showing up in the finals.

The three contestants from the school, Bright Senyo Gadzo, Francisca Lamini, and James Lutterodt, made the school proud for being the first Volta-Oti team to contest in the finals.

To express their joy and appreciation to the contestants for a good work done during the competition, the association organised a dinner for them in Accra.

President of the association, Mr Kojo Mattah, said the school was very proud of the students for their outstanding performance during the competition.

He expressed optimism that their grand finale appearance would not be just a nine-day wonder, adding that the school would continue to make appearances in subsequent contests.

“We are putting all the structures in place to ensure our presence in the next finals of the NSMQ”.

The National Board Chairman for Ketasco NSMQ, Dr Thy-Will Delali Aboflah, said it had been the dream of the school since 2008 to see KETASCO at the finals and consequently win the trophy some day.

Mr Aboflah further revealed that the school had a five-year plan since last year towards the NSMQ and stated that this year was evident that the plan was on course.

He expressed joy and excitement and attributed their milestone achieved to constant prayers and hard work.

“Although we did not win the gold medal, being in the third place was also awesome and we are very proud of ourselves,” he said, adding that come next year their juniors would be coming for the gold medal.

Miss Lamini, who pulled an outstanding performance at the competition, also attributed the milestone to a lot of hard work and advice from their trainers.

She revealed that they were taken through a lot of trials contest, which prepared them adequately for the competition.

Miss Lamini further advised other young girls to work hard, believe in their potentials and face everything with humility.

In 2009, they reached the quarter finals and went on recess after the NSMQ was suspended for two years.

In 2018, 2019,2020, the school reached the semi finals until 2021 where they reached the finals to compete with Prempeh College and Presbyterian Boys Senior High School, Legon, for the ultimate trophy.