Traders in the capital city, Accra, have taken their wares to the streets and occupied parts to hawk and clamour for customers.

From many parts of Accra, the phenomenon has become common on almost every principal street degrading the beauty of the city.

The traders initially began their activities on pavements, but have now moved to portions of major streets ostensibly occupying those spots.

The situation has resulted in the wanton generation of filth, congestion, choked drains and vehicular and human traffic, which are creating a lot of inconveniences and nuisance for pedestrians and shoppers.

Presently, it is common to find hawkers selling yams, tomatoes, fish, biscuits, food, lemons, eyeglasses, hats, shoes, bread among others in the middle of the streets.

Traders have mounted sheds on some pavements in Accra.

Meanwhile, the Accra Metropolitan Assembly (AMA) Bye-law 2017 2 (a) on Obstruction in Public Pathway states that a person shall not park a vehicle, goods or items in a public pathway or pavement.

However, traders and drivers continue to flout the law with impunity.

Activities
From Odorkor Tipper to the main traffic lights, traders have taken over the pavements with their wares such as furniture and floor tiles, while articulated truck drivers park on the shoulders of the Odorkor Kasoa Highway.

At Madina, Kaneshie and CBD, for instance, the illegal trading activities going on there have narrowed human walkways and the roads, which often cause traffic.

Some drink sellers at Madina operate on the median of the highway.

A shoe seller at Madina told The Mirror that he was only plying his trade under the footbridge for a few months and would move away.

A waakye seller at Kanehsie, who only gave her name as Meemuna, said: “I started selling the waakye early in the mornings to those going to work and I realised people liked it, and have so I have since been here.”

When asked if they were aware their activities were illegal, Ms Ama Akoto, who sells yams on the pavement at Kanehsie, said: “But we pay tickets to the authorities every day. Moreover, the markets are full, and we do not have space in there.”

An electronic gadget seller at Lapaz, Mr Emmanuel Mensah, also said lack of space and appropriate market for their wares had compelled them to park their items on the pavements.

“We are creating jobs through this and we should be treated fairly by allocating specialised markets here for us,” he added.

Yam Sellers
Some yam sellers are gradually invading parts of the Graphic Road and sections of the road leading to the Accra Psychiatric Hospital.

The traders, who are gradually becoming a nuisance to both pedestrians and the motoring public, pack bulk yams beneath the traffic intersections and at secure corners while they line about four tubers of yam in their arms and move from one vehicle to the other, advertising and bargaining with prospective buyers in traffic.

The practitioners of what could be described as “modern commerce” defy the odds, as they stroll their way through vehicles and other road users and occasionally clash with motor riders.

Additionally, some drivers upon seeing them would roll up their screen to avoid having an encounter with them.

Market
Although there are market centres for the trading of yam business inside the CMB market, Makola, Nima market and Agbogbloshie, these vendors resort to selling in traffic where some claim business is good. 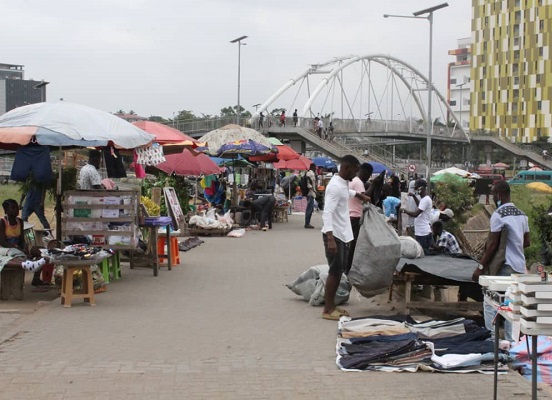 The Mirror spoke to some of the hawkers along the Holy Spirit Cathedral and they explained that selling in traffic was better as compared to the markets as they were able to sell everything, especially in the evening when they have reduced the price.

They also believed that a lot of people were willing to buy more than one in traffic; hence, the reason they moved to buyers or pedestrians in traffic with about five tubers of yam.

One of the sellers, who gave his name as Sissey, said he was selling on the street to make profit and not necessarily because there was no space in the various markets. 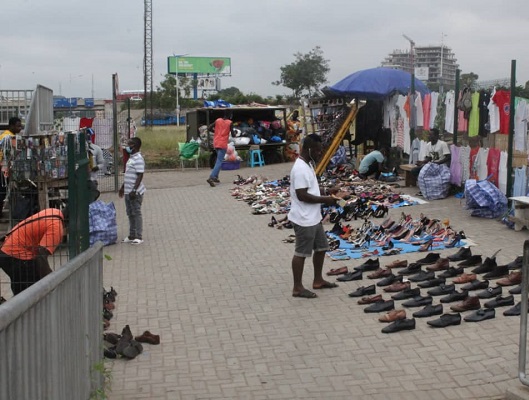 He said they would go to the market to get yam in bulk and bring them to the street for retail prices, adding that they left the yam in the care of some of their people while they traded in traffic.

He explained that on the street they could sell about five tubers of yam for GH30 but in the market it could be lower.

“The business is better on the street than in the markets, aside from the fast-selling aspect, we also get better offers. It is also convenient for the customers as they buy and put in the car rather than moving all the way to the market to buy yam,” he stated.

Another seller, who described the business as risky, said: “it is our source of employment”.

Prohibition
A source at the AMA said by the regulations, no one was allowed to take over any portion of the road or pavements with their merchandise.

According to the source, the city authority had started building markets within its jurisdiction to move the traders off the streets since their activities were causing a lot of troubles for other road users.

In May 2019, the Informal Hawkers and Vendors Association (IHVA) of Ghana called on the government to come up with a comprehensive policy to regulate the activities of street hawkers and vendors in the country.

But that is yet to see the light of day, as traders continue to take advantage of the inability of city authorities to clear them off the streets.