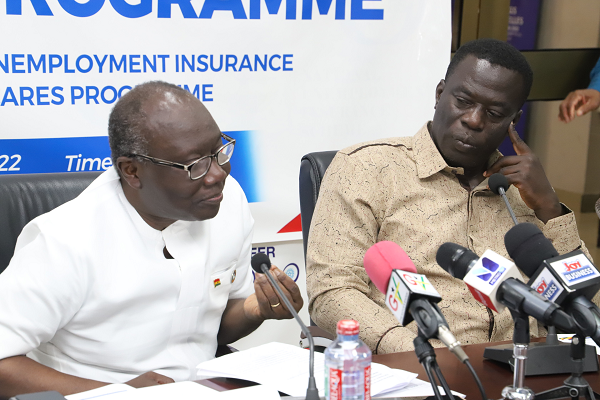 The government has launched the Training and Retraining component of the National Unemployment Insurance Scheme (NUIS) to equip 15,000 Ghanaians with employable skills.

The initiative, under the Ghana Cares 'Obaatanpa' programme, is to serve as a mitigating measure for unexpected future events that may disrupt employment in the country.

It is designed to focus on skills upgrading, work ethics, productivity and attitudinal change to boost workers’ prospects for re-entry into the labour market at higher levels of productivity or performance.

At the launch in Accra yesterday,the Minister of Finance, Ken Ofori-Atta, said an implementation committee, with membership from the government, organised labour, and employers, had been constituted to see to the effective implementation of the programme.

He said the government would pay the fees of workers who enrolled in the programme.

"After today’s launch, advertisements will be placed in the daily newspapers to call for applications for the programme. We encourage all eligible beneficiaries across the country to apply," he said.

The programme, he said, was aimed at preserving and upgrading the human capital and skills of the current cohort workers who lost their employment because of the COVID-19 pandemic.

It will be implemented through collaboration between the government and selected public and private training institutions across the country.

Mr Ken Ofori Atta said the government, in the 2020 Mid-Year Fiscal Policy Review, announced the establishment of a National Unemployment Insurance Scheme (NUIS) and a Training and Retraining Programme as part of the “Obaatan Pa” GhanaCARES Programme as part of measures to mitigate the impact of the COVID-19 pandemic on households, firms, and the economy.

He said the outbreak of the COVID-19 pandemic devastated economies around the world impacting thousands of lives and livelihoods.

"A major outcome of the pandemic was the unprecedented levels of unemployment and joblessness recorded. While Ghana largely avoided serious health ramifications, including public sector job losses, private sector jobs were lost and to date, there are still unique set of socioeconomic challenges to overcome," he said.

Mr Ofori-Atta explained that the programme was developed through extensive consultations between government and key stakeholders comprising representatives from the Ministry Finance, the Ministry of Employment & Labour Relations, Organised Labour and Ghana Employers Association and other stakeholders such as the Ministry of Education, Ministry of Tourism, Arts and Culture, Ghana Education Service and the Ghana Tourism Authority (GTA).

He said the programme would be implemented in two phases with the first covering workers in the sectors that were mostly affected by the pandemic, the private education sector and the tourism and hospitality sector.

The second phase, he said, would cover other sectors of the economy with emphasis on vocational and technical training.

Mr Ofori-Atta explained that beneficiaries who enrolled in the programme had two options.

He said the first option was for workers who had the requirement and capacity to pursue existing academic programme or courses available in the various training institutions.

“These existing courses are adjusted with add-ons that address the issues of work ethics, productivity and attitudinal change and they are of longer duration, usually between six and 12 months," he said.

The second option, he said, was the core competency-based training programmes primarily for workers who did not have the capacity nor the time to pursue long duration academic courses.

The Minister of Employment and Labour Relations, Ignatius Baffour-Awuah, said the initiative would help bring calm on the labour front as it would provide hope for people who lost their jobs during the pandemic.

He called on the public, especially the youth, to take advantage of the programme to help ensure the security of their jobs.

The Secretary-General of the Trades Union Congress (TUC), Dr Anthony Yaw Baah, expressed excitement about the initiative and said the labour front had been expecting the launch of the programme since it was first announced two years ago.

“I think this will give opportunities to those who lost their jobs during COVID-19 and I think many people will take the opportunity to develop their skills so it's like turning the challenge into opportunity," he said.