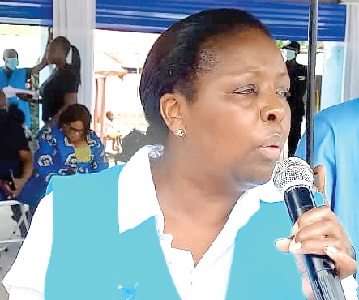 Esther Kiragu, Country Representative of the UNHCR, speaking at the event Follow @Graphicgh

All Ivorian refugees in Ghana, including those who fled post-election violence in Cote d’Ivoire, are to return to their country before June 30, this year.

This follows the invocation of the cessation clause to enable all the refugees to return to their home country, the UN High Commission for Refugees (UNHCR) has said.

The Country Representative of the UNHCR, Esther Kiragu, who announced this, said the decision was informed by the peace that now existed in Cote d’Ivoire, for which reason its citizens could now return in safety and dignity.

She was speaking at this year’s World Refugees Day, which was commemorated at the Ampain Refugee Camp in the Ellembelle District in the Western Region yesterday[June 20, 2022].

The commemoration is used to celebrate the resilience, courage and strength of the millions of people around the world who have been forced to flee their homes due to violence, war or persecution.

It was on the theme: “Everyone has the right to seek safety — Whoever they are, wherever they come from and whenever they are forced to flee.”

According to Ms Kiragu, “this year alone, 2,000 Ivorians have been supported to return voluntarily and many others have requested for the same support, while a few have sought alternative status to stay on as migrants in Ghana, not refugees”.

“Many former refugees have also returned home in safety and dignity, including Sierra Leone and Liberia, in the recent past,” she said.

She commended the government of Ghana for hosting refugees over the years.

She said not only did the country grant asylum to people, even during the COVID-19 pandemic when borders were closed; those who sought to return home were given permission to cross the border.

Ms Kiragu added that Ghana also went further and shared available COVID-19 vaccines with the refugees, in full acknowledgement of the fact that “no one is safe until we are all safe”.

She thanked the people of Ellembelle and adjoining communities for being gracious hosts, adding: “You have also demonstrated that refugee status is, indeed, not permanent and that when it is safe to do so, refugees do return home.”

The Minister for the Interior, Ambrose Dery, said the theme for the commemoration was in line with the government's objective of securing the safety of every person in the country.

He said the government, working with partners in refugee management, ensured that refugees had access to education, health and other social services.

“The government, through the Ghana Refugee Board, will continue to support the UNHCR in the implementation of livelihood activities, and I am reliably informed that there are many success stories in this regard.

“We continue to live up to our responsibilities, as spelt out in the UN Convention on the Status of Refugees, as well as the 1969 AU Convention on Refugees which we have signed up to,” he said.

According to the minister, the nation hosted refugees from over 35 different countries and “I am happy to say that they have all generally been of good conduct”.

He further said Ghana was implementing a progressive asylum system that would not require all refugees to stay in camps, as they would be given opportunities to develop their potential.

Mr Dery commended the Ivorian refugees for living peacefully in the country for the past 11 years.

“I do not believe that anybody wants to be a refugee for life. It is, therefore, heartwarming that since the beginning of accelerated voluntary repatriation in 2021, Ivorians have returned home voluntarily in their numbers,” he said.