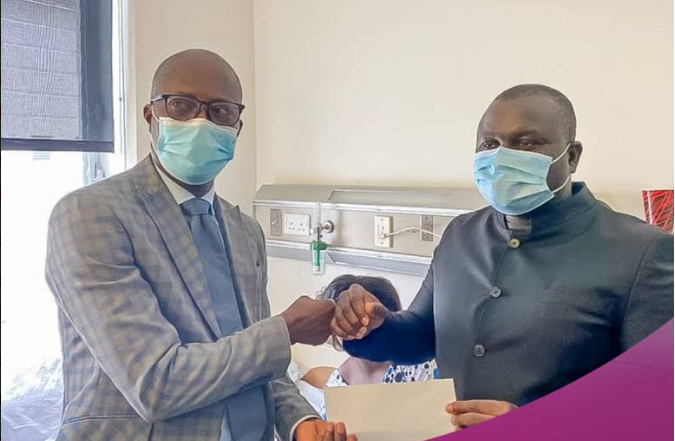 Aspiring Ghana Journalists Association (GJA) President, Mr Albert Kwabena Dwumfour, has donated an amount of GH₡10,000 towards the surgery of the first Siamese twins in Ghana.

Speaking at a short ceremony to donate the money to Management of the Greater Accra Regional Hospital where the twins are on admission, Mr. Dwumfour said he was inspired by teachings of Christianity to give, hence the gesture.

Mr  Dwumfour said the media’s role must not be limited to only exposing the ills of the society but also support the vulnerable in society through philanthropic activities.

“Our watchdog role goes beyond being the whistleblowers of this country but also identifying the voice of the vulnerable to whom we represent. Every media house is the voice for the voiceless because it is not everyone who will have the opportunity to speak about one’s sentiments. And this special case is a typical case of the media’s role in assisting in a very special way,” he said.

He also appealed to businessmen, corporate entities, and the entire media fraternity to donate towards the operation of the twins, saying that helping them will contribute to national development.

“I call on all well-meaning Ghanaians to support. As journalists, we have the opportunity, we have the right to help save the lives of this twin and it is our core mandate that we champion such worthy course. It is not just about politics and issues of national development because all these contribute to national development. This is history in the making so we should all support and encourage the medical practitioners to be able to carry out the operation successfully and I think it will be a credit to Ghana,” he said.

For his part, the Medical Director of the Greater Accra Regional Hospital, Dr. Emmanuel Srofenyoh said the twins have 6 to 8 months for the surgery.

Dr. Emmanuel Srofenyoh noted that the joining of the twins has no spiritual connotation and that it was just a failed scientific process.

He noted that the neurosurgeons in Korle Bu are collaborating with Greater Accra Regional Hospital and other Medical Facilities to carry out the surgery.

He assured the public that although the first time Ghana is going to carry out such an operation and that the surgeons can do it successfully with the help of the almighty God, adding that what is needed now is the resources.

He also expressed gratitude to Mr. Dwumfour, who is also the media consultant to the Greater Accra Regional Hospital, urging all media houses to use their platform to advocate for support for the twins. 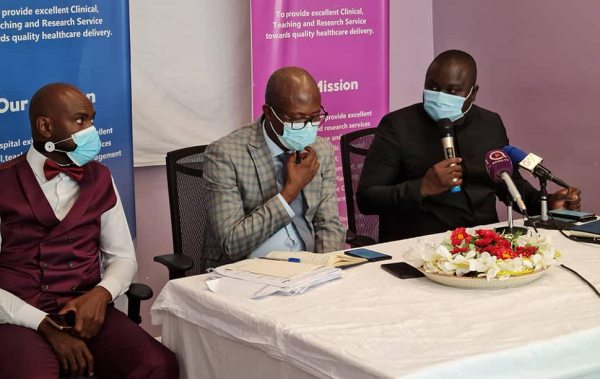 A Consultant Neurosurgeon at the Greater Accra Regional Hospital, Dr. Emmanuel Yao Voadu also assured the public that with the help of God, they will carry out the operation successfully.

He said the GH₡3,000.000.00 will be used for the medical bills of the twins while an amount of GH₡20,000000 will be needed to purchase the equipment that would be used to carry out the operation.

Although Ghana does not have the equipment and has to be bought, he said after using it for the surgery, the equipment will become a property to the Nation to carry out further related surgeries.

He noted that the Siamese twins happen out of 2.5 million births.

Out of that, he said 60 percent die in the womb, 35 get born and die 24 hours, adding that this particular twin surviving three months after their birth tells that they are champions and survivors already.

He noted that the team who will work on the surgery is composed of 100 medics and paramedics who are all in the same spirit to separate the children successfully.

“It is not going to be easy but by the grace of God we will carry it out successfully,” he said.

Dr Emmanuel Yao Voadu said the surgery would be carried out in 5 stages, saying the within one month they should be done with the first stage.

He said time was far spent, therefore calling on all Ghanaians to donate towards the operation,

Adding that even if it is GH₡1.