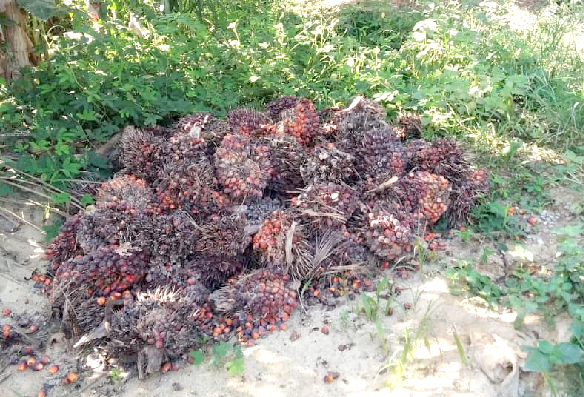 Workers of the B-BOVID Ltd, an oil palm agribusiness company in the Ahanta West Municipality, have appealed to the government to intervene in the boardroom wrangling over positions in the company between directors leading to the closure of the company without any prior notice to workers and thousands of farmers.

Currently, more than 90 direct employees of the company said their source of income had been truncated without any prior notice, and the gate to the company’s premises had been locked.

The workers said the current development at the factory was disincentive to foreign investment and did not understand why a simple board decision could lead to a closure and leave workers jobless and financially stranded.

“We want urgent intervention of not only the government, but also the Ministry of Trade and Industry, Ministry of Agriculture, Ghana Investment Promotion Centre, to protect jobs as well as protect the huge foreign investment that has been pumped into the company over the past three years by its foreign partners”.

At a press conference in Takoradi, the Agriculture Director, Mr. Charles Frimpong, said the workers were declared redundant and that the last salary paid to workers was in September.

He said currently, the fruits harvested by more than 5,000 oil-palm farmers who supplied the factory were rotten on their farms and those yet to be harvested had been left at the mercy of birds and rodents.

The situation aside rendering the workers with no hope, the monies sourced by farmers and invested in their smallholder palm plantation that supplies the factory was going waste and plunging them into avoidable debt.

Mr. Frimpong said the company went down financially some few years ago but was rescued after the injection of $5-million by Moringa SCA SICAR (Moringa) and became a partner with a board in place to ensure corporate governance principles were followed.

He explained that after the partnership, the company’s output increased from 5-tonnes to 10-tonnes capacity with a corresponding high demand and good global price of the crude oil palm and palm kernel oil.

“It is however unfortunate that a company with a high potential to meet the needs of smallholder farmers and double its employment capacity is now closed due to a dispute between the founder and foreign investors of the company,” he said.

The genesis of the dispute, he said, was after the management changed the board in January 2021, which saw the founder of the company, Mr. Issa Ouedraogo, who also doubled as the chief executive, reassigned as the president of the company due to non-performance and a new chief executive appointed.

As a new company with a board, the board had the right to change the managers if the performance was not up to standard, therefore the workers were surprised that Mr. Ouedraogo did not understand this principle and fought the new owners who had 95 per cent share in the company.

The founder of the company did not agree with the changes made by the board and prevented the newly appointed CEO from taking his new role and questioned why he was not allowed to take a unilateral decision and therefore closed down the company and seized all assets.

“Since July 12, this year, the company has remained closed and all employees are currently home and worried, our farmer groups are also unable to sell the palm fruits,” he said.

The employees said, “We believe that while the parties are going through the legalities to decide who becomes the new chief executive of the company, we should be allowed to work, our prospects are huge since the parties are not in court over the ownership but CEO position.”