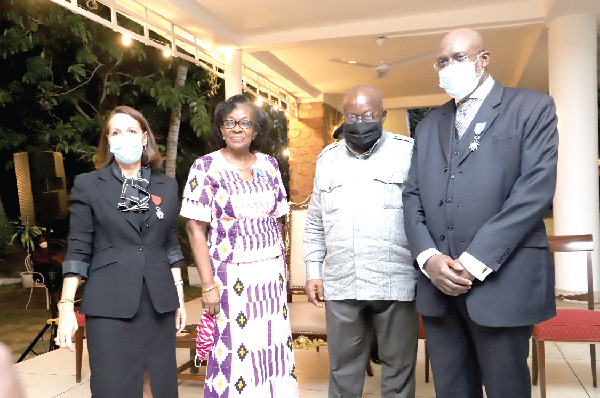 The French government has honoured two Ghanaians for their contribution to the dynamism in the bilateral relationship between the two countries.

The awardees, Ms Lillian Osae-Kwapong, an educationist, and Mr Mawuli Ababio, an international financial expert, are the first Ghanaians to receive such honours.

The awards were bestowed on the two because of their contribution to France's influence in serving communities.

The event, which was held at the French Embassy in Accra, was witnessed by President Nana Addo Dankwa Akufo-Addo, including other distinguished personalities.

Also present were the families and friends of the awardees.

The National Order of Merit was created by a decree on December 3,1963 by General Charles de Gaulle to reward distinguished efforts is in the exercise of duties for at least 10 years, in a public, civil, military role or private activity.

It is the second highest national order in France after the Legion of Honour.

The Medal of Merit is a star with six double branches enamelled in blue, topped by a clasp made of intertwined oak leaves. The oak is a symbol of justice in France.

The centre of the star is surrounded by intertwined laurel leaves (symbol of arts and literature), with the central disc featuring the effigy of the French Republic

In the citation read by Mrs Ave, she said Ms Osae-Kwapong worked with Alliance Française and promoted the French language and the Francophone world.

“You probably thought it would just be a hobby for a little while, but you ended up dedicating 39 years to this institution. You made it what it is today,” she said.

The ambassador said Ms Osae-Kwapong “created the bilingual section as a secretariat, which trained professionals who now work for many organisations where being bilingual is an asset, with some working at the French Embassy, the French Development Agency (AFD) and some French companies in Ghana”.

Ms Osae-Kwapong also created internship opportunities for graduates of that section for over 20 years, and took part in events that promoted the French language and the Francophone culture in Ghana.

According to the ambassador, it was through Ms Osae-Kwapong that the Alliance was relocated to its current place in 1994, adding that “no wonder you were the chairperson of the board of Alliance Française several times between 1999 and 2019”.

For his part, the citation said Mr Ababio started his career in financial institutions such as the International Bank of West Africa (IBWA), SIFIDA Investment Company, Geneva (now BNP Paribas) and the African Development Bank.

Mr Ababio organised and accompanied President Kufuor to France for a state visit in 2005.

He also had a tight business relation with a number of French companies such as Lagardère Travel as consultant and also represented F-C Oberthur, Gemalto or Edifice Capital in Ghana and a board member of TOTAL Energie and Société General.

Mr Ababio was also the Vice-President and Managing Partner of Phoenix Capital Management S.A., based in Abidjan, a private equity fund, and was also a facilitator of French economic diplomacy.

“And what’s more, how do you still find time to actively work with the Alliance Française since you kindly accepted, in 2019, to take over the chairmanship of the board after Lillian. And you still manage to thoroughly practise your golfing, travel the world and enjoy your favourite cigars, among other hobbies,” Mrs Ave enquired.