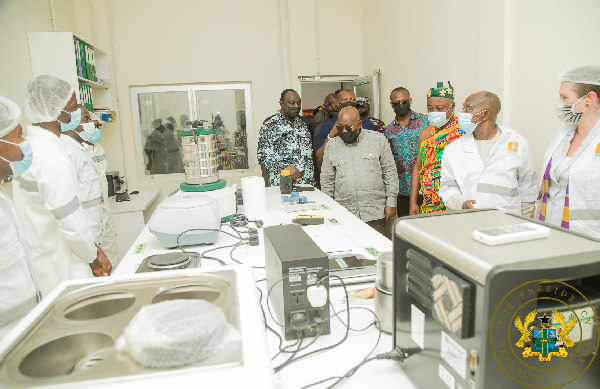 President Akufo-Addo (arrowed) inspecting some facilities at the new factory in Kumasi. With him are Mr Alan Kyerematen (left) and some officials of the company

The beneficiary companies comprise those operating under the government’s one-district, one-factory (1D1F) programme.

President Nana Addo Dankwa Akufo Addo said this when he inaugurated a new factory for Premium Foods Limited, a company operating under the 1D1F, at Kwaso in the Ejisu Municipality of the Ashanti Region last Thursday.

He said the main sectors that benefited from the exemptions included agro-processors, ceramics and hardware manufacturers, and vehicle assembly plants.

The President described the establishment of the factory as a concrete manifestation that economic development of value-addition industrial activities within a conducive and business-friendly environment was making a headway.

“This afternoon’s ceremony is in fulfilment of the promise by the government, in partnership with the private sector, to set up at least one medium to large-scale enterprise in every district in the country,” he said.

President Akufo-Addo said Premium Foods was a classic example of the critical role agricultural production and value addition played in economic development of countries, adding that “the contribution of the company highlights the
Ghanaian ingenuity, entrepreneurial spirit, as well as the fortitude to succeed, no matter the challenge”.

The new state-of-the-art manufacturing facility has the capacity to blend over 96,000 tonnes of maize, soybean, sorghum and millet annually.

The President said: “I am pleased to learn that this new factory is generating some 120 new jobs and also creating thousands of indirect income-earning opportunities for farmers and out-growers along the value chain, mostly women and youth, in all parts of the country.”

He said he would continue to support private sector operators to become globally competitive, and, thereby, take advantage of market integration frameworks such as the African Continental Free Trade Area (AfCFTA), which Secretariat had been established and inaugurated in Accra.

President Akufo-Addo assured prospective companies, desirous of establishing companies under the 1D1F initiative, of the support of the government.

The President further described as commendable, the collaboration between the World Food Programme (WFP), the Canadian High Commission in Ghana, the United States Agency for International Development (USAID), the Alliance for a Green Revolution in Africa (AGRA), the African Development Bank (AfDB), Department for International Development (DFID), the J. A. Kufuor Foundation, as well as local participating financial institutions for providing both technical and financial support for the project.

“I commend also the proprietors and management of Premium Foods, led by Mr Tom Gambrah, a seasoned Ghanaian entrepreneur, for spearheading the establishment of this state-of-the-art manufacturing facility,” he added.

Over the years, Premium Foods has supplied blended fortified and non-fortified products and ingredients to international relief organisations and multinational food and beverage manufacturing companies across Africa, including “Feed the Future” programme, under the US government global hunger and food security initiative.