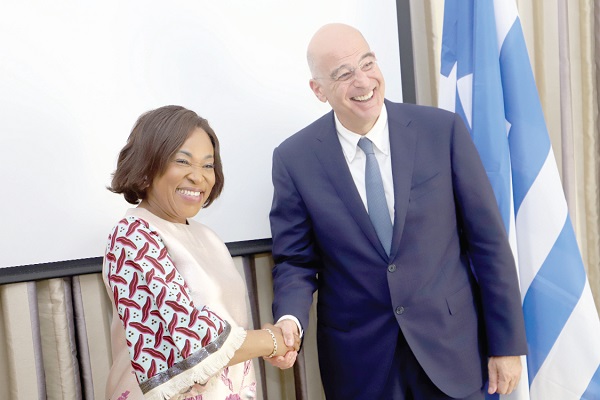 Ghana and Greece have committed to collaborate in a number of areas for mutual benefits.

Also, the collaboration is expected to strengthen the ties between the two countries.

The two made the commitment when the Minister of Foreign Affairs of Greece, Nikos Dendias, called on his Ghanaian counterpart, Shirley Ayorkor Botchwey, in Accra yesterday to discuss areas for mutual collaboration.

At the meeting, which was preceded by a closed-door meeting between the two Foreign Affairs ministers, Mr Dendias expressed happiness that the two countries had already signed a memorandum of political consultations.

They will also sign three others, which were already before Ghana’s Office of the Attorney-General and Minister of Justice, pending inputs to facilitate their signing and execution.

"The new reality is that Africa is the fastest growing economy and population, making it an investment hopeful," he said.

Mr Dendias said Africa had become the hope of the world and so the European Union must invest in Africa.

He said the Mediterranean and the Atlantic should not be seen as a border but rather a bridge connecting the two continents to facilitate collaboration, investments and relations.

He again pledged Greece's support on the management of the Gulf as it wielded the highest maritime fleet.

"We feel at home here and we look forward to have more of these deliberations," he said.

Welcoming the Greek Foreign Minister, Ms Botchwey said she was delighted to meet Mr Denidias for the second time to enhance collaboration between both countries.

She thanked the visiting minister for delivering on his promise at their first meeting to become an advocate for the country and Africa within the EU and beyond.

On the issue of Greece having the biggest maritime fleet and being a member of the EU, Ms Botchwey said the country, having assumed the chairmanship of the Gulf of Guinea, would need the support of Greece to resolve the piracy on the waters.

She said the Gulf of Guinea would be undergoing restructuring under Ghana’s chairmanship and would require collaborations and partnerships from countries such as Greece.

Ms Botchwey assured him that she would follow up on the proposed MoUs before the Attorney-General.

While reiterating the country's commitment to collaboration with Greece on areas agreed on, she appealed for the facilitation of more Greece trade and investment visibility in the country.

"Because our country hosts the African Continental Free Trade Area headquarters, we will want to see your private sector use our country as a stepping stone into Africa," the Minister of Foreign Affairs and Regional Integration, said.

After the meeting, which was attended by officials from both countries, the two ministers went back into a closed-door meeting.