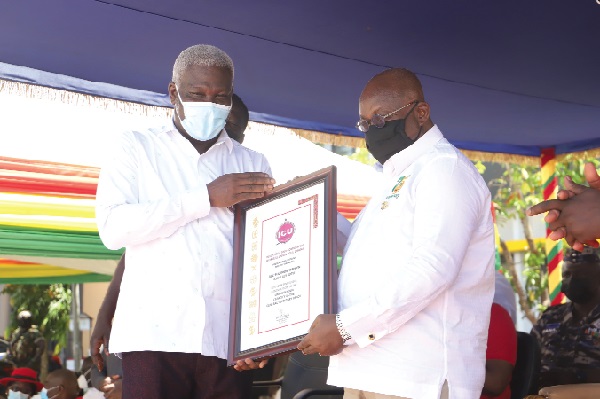 Organised Labour has described the decision by President Nana Addo Dankwa Akufo-Addo to freeze the 2021 wage increment for the executive branch of government for this year as a positive move.

The Trades Union Congress (TUC), the Ghana Federation of Labour (GFL) and the Industrial and Commercial Workers (ICU), were in agreement that regardless of the quantum of the amount, it was a good signal and an indication that the country was not out of the woods yet, in view of the ravages of the COVID-19 on the socio-economic life of the country.

However, the labour unions urged the government to act with dispatch to address issues that were worsening the plight of workers.

At this year’s celebration of May Day at the forecourt of the TUC headquarters in Accra last Saturday, President Akufo-Addo said he had frozen salary increments for this year for himself, the Vice President, ministers, deputy ministers and all appointees of the executive.

“I have taken the decision to freeze salary increment for this year, 2021 for myself as President, the Vice-President, ministers, deputy ministers, and all appointees of the executive.

“It is our modest contribution to reduce the damage to our public revenue and to help hasten our nation’s recovery from the ravages of the pandemic,” he stated.

The May Day celebration was on the theme: “Economic Recovery in an Era of COVID-19: The Role of Social Partners”.

The Secretary-General of the TUC, Dr Anthony Yaw Baah, said issues about pensions, especially the need for top up for the second-tier beneficiaries, poor housing for workers, delays in the negotiation of the national minimum wage and base pay for public sector workers must be taken with all seriousness and also required urgent attention by the government.

Another issue, he said, was the devastating effects of illegal mining and its impact on the economy and the environment as well as the threats of import restrictions on Ghana's cocoa by the European Union.

He added that workers also flagged the inability of Licensed Buying Companies (LBCs) to pay farmers for cocoa beans purchased, the blatant violation of workers’ rights by some employers, with special reference to the right of freedom of association and collective bargaining.

“There was also the issue of non-payment of SSNIT contribution by some employees. Then the introduction of new taxes and increases in resistant ones, which impose additional burden on motorists and push up prices of basic items including food,” Dr Baah added.

Speaking to the issue, the General Secretary of the GFL, Mr Abraham Koomson, told the Daily Graphic that the move would save the national kitty some money which would be channelled into other priority areas.

"The economy has been ravaged by COVID-19 and all businesses are struggling to pick up. The fiscal space has been compressed as well so this bold move will free the fiscal space in a way," he said.

Mr Koomson, however, said the President must ensure that savings from that kind gesture would be put to good use through prudent management of resources.

He added that the move by the President was synonymous to the sacrifices citizens were already making because of the COVID-19 pandemic.

"Looking at the numerous levies and taxes imposed on commodities, the ordinary citizens are compelled to sacrifice more than what the executive intends to do, but it is a good start, he said, adding that the GFL "expects the President to focus on implementation of the laws which will make major impact on addressing the declining performance of the country's economy."

Mr Koomson called for a further merger of some ministries and reduction of appointees to reflect the country's current economic situation.

ICU says all not well

Sharing his views with the Daily Graphic, the General Secretary of the ICU, Mr Solomon Kotei, said although the news was refreshing, it showed that all was not well with the economy.

“It means that all is not well with our finances,” he said.

He suggested that the freezing of salaries should be spread further to include chief executives of quasi-government institutions.

Addressing the workers at the event, President Akufo-Addo gave an assurance that the recent apprehension on the labour front about minimum wage opener, which was also raised by the secretary general of the TUC at the ceremony, was being addressed.

“I am happy to state that the negotiations with the tripartite committee have begun in earnest,” he added.

The President stated that the pandemic had brought even great economies to their knees and added that the government’s hard work for three years, which brought fiscal stability and readied the economy for sustainable growth, had been severely threatened by the pandemic.

Nevertheless, he stated that the government was not sparing any effort to bring the economy back on track to accelerate development.

President Akufo-Addo stated that the pandemic had forced many changes in the work environment, and emphasised that though some of the changes might disappear, others would stay as the new normal and cited working from home that had become the regular method of work in many establishments.

He stated that production methods were going to change and, therefore, urged business owners, management and workers to work together to adjust to the new ways of doing things.

“Managements cannot continue to expect that we do things as we did in the pre-COVID times, in much the same way as workers too must accept that the world has changed significantly,” he added.

President Akufo-Addo said revitalising the economy from COVID-19 would impose great responsibilities on all the social partners.

President Akufo-Addo explained that the skills required to survive in the pandemic were different from the previous ones and cautioned that “unless we keep up and upgrade our skills regularly, we should be truly left behind”.

He announced that the Ministry of Employment and Labour Relations was working to address the question of the future.

Going forward, the President said he was looking up to frank and vigorous discussion of the subject to make sure the country was ready for the many changes that needed to be embraced to develop the economy in these changing times.

President Akufo-Addo noted that the wearing of face masks was not pleasant but it remained the most effective protection against the pandemic.

He said challenges, including international vaccine politics and the unpredictability of the supply chain, meant that the country had not been able to procure the vaccines according to the scheduled time, as envisaged.

He gave the assurance that government was working hard to secure the vaccine so that the country could return to its economic activities and normal life as desired.

With the 2021 Population and Housing census set to commence on June 27, 2021, he appealed to organised labour to give their support and cooperation to the programme.

That was because it would provide an accurate comprehensive database that would enable the government to plan properly for the progress and prosperity of the country.