Fertilizer plant to be sited at Jomoro – Akufo-Addo 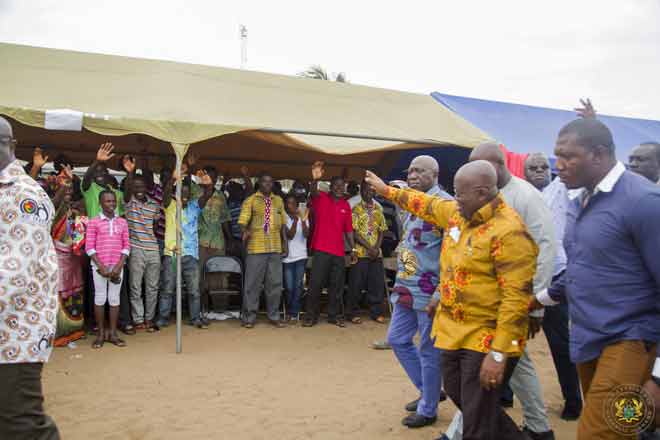 President Nana Addo Dankwa Akufo-Addo, has revealed that his government, through the Ghana National Petroleum Corporation (GNPC) and the Ghana National Gas Company (GNGC), will soon establish a fertilizer plant at Jomoro, in the Western Region.

According to President Akufo-Addo, the establishment of this plant will mean the fulfilment of his pledge to set up a factory in the Jomoro district – 1-District-1-Factory.

The proposed fertilizer plant is also in fulfilment of a 2016 manifesto pledge of the New Patriotic Party to “tap into our gas and petroleum resources, to produce locally fertilisers for the industry to improve agricultural yield and save foreign exchange.”

President Akufo-Addo made this known on Tuesday, on day two of his 3-day tour of the Western Region, when he interacted with the Chiefs and people of Half Assini, in Jomoro.

With Jomoro set to be upgraded from a district to a municipality in September, President Akufo-Addo noted that the inability of the Jomoro Assembly to approve a District Chief Executive on three separate occasions may hamper this development.

“I am appealing to you. Help me by approving the new nominee I am proposing as DCE for Jomoro. I can assure you that this nominee is resourceful, hardworking and can do the job. We cannot have a Municipality which does not even have a DCE,” the President said.

It is for this reason that a flagship programme of his government, the Free SHS policy, President Akufo-Addo reiterated, will commence in September 2017, which will ensure that parents no longer bear the financial burden of taking their children to senior high school.

Touching on the dwindling fortunes of the cocoa sector, President Akufo-Addo noted that the policies and programmes instituted by former President John Agyekum Kufuor ensured that the cocoa production hit 1 million tonnes in 2010/2011.

However, cocoa production has since declined, with the 2015/2016 crop season recording a production of 778,000 metric tonnes.

“My government is going to increase cocoa production again to 1 million tonnes, and move it to 1.5 million tonnes in the course of my mandate. We will also ensure that cocoa farmers gain their pride of place in our society. We will make the cultivation of cocoa a source of gainful employment once again,” he said.

With his government having been saddled with huge debts, President Akufo-Addo told the Chiefs and people of Jomoro that he remains unfazed and will put in place the necessary measures to ensure improvement of the living conditions of the people, which includes the construction of the town roads at Elubo and Half Assini.

Later in the day, President Akufo-Addo visited the Atuabo Gas Plant to familiarise himself with the operations of the company.