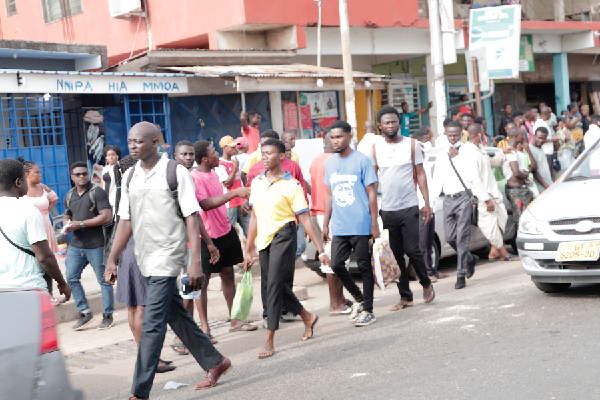 Some stranded passengers trekking along the Lapaz-Abeka road

Hundreds of commuters were left stranded at lorry parks in some parts of the country yesterday following the withdrawal of services by commercial drivers over high fuel prices.

According to the drivers, the current prices of fuel were affecting their businesses and they, therefore, wanted the government to reduce some taxes on fuel pricing.

Many frustrated commuters, including schoolchildren, had to walk long distances to their destinations in some parts of the country, especially the regional capitals.

At some lorry stations in Accra, some people who claimed to be part of the striking drivers and their mates were seen playing football, while some stranded passengers looked on.

There were chaotic scenes at some stations, as some drivers who attempted to take passengers were prevented from doing so by some of the striking drivers and their mates.

In Accra, Emelia Ennin Abbey reports that there were long queues at lorry stations at areas such as Sowutuom, Manhean, Nungua, Ablekuma, Anyaa and Kasoa.

Ride hiring services, such as Uber, Bolt and Yango, increased their fares due to the high demand for their services on their mobile applications.

Other commuters were left with no choice but to patronise the services of illegal commercial motorbikes and tricycles, popularly known as ‘Okada’ and ‘Pragia’.

At some places, the strike turned chaotic when some members of transport associations tried to block passengers from boarding vehicles.

At Ablekuma in the Ga West municipality, there was a clash between some commercial drivers and their striking colleagues at Ablekuma Curve on the Awoshie-Pokuase Highway, as the latter accused the former of betrayal. 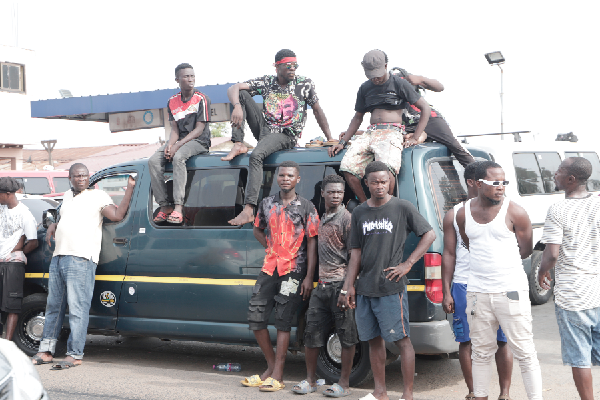 Some of the striking drivers and mates at Abeka in Accra. Pictures: EDNA SALVO-KOTEY

The disruptions along the route led to heightened security, with policemen from the Anyah District Police Command having a tough time restoring order.

One of the angry drivers, Ernest Adu, told the Daily Graphic: “We want to send a message to the government to reduce the taxes on fuel.”

Some passengers claimed they had been in queues for almost two hours, waiting for vehicles, but that none was available, writes Donatella Esinam Kudoto.

They called on the government to listen to the plea of the drivers, since the strike was biting.

Traders at the Madina Zongo Junction station also lamented the strike, as they said it affected their sales.

Abigail Sedinam Kortiah also reports that some drivers and their mates took to playing football at the Ashaiman lorry station.

According to the President of the Ashaiman Cooperative Transport Society, Mr Alhassan Baba, his outfit supported the action of members because they needed to benefit from their livelihood.

The drivers urged the government to do the needful by either reducing fuel prices or agreeing to an increase in transport fares.

From Tamale, Mohammed Fugu reports that there was near commotion at some lorry stations, including the central business district of the metropolis, as some drivers prevented their colleagues from loading passengers.

Tricycle operators who defied the directive were also fiercely prevented from loading.

Some drivers who spoke with the Daily Graphic said the strike would remain in force until all their demands were fully met by the government.

A driver, Adam Salifu, said: "Because of the increase in fuel prices, we are unable to meet our daily sales.”

Another driver, Misbao Iddrisu, appealed to the government to, as a matter of urgency, attend to their demands to enable them to return to work.

Emmanuel Adu-Gyamerah & Biiya Mukusah Ali report from Sunyani that there was no sign of a strike by drivers at most of the lorry stations they visited, as business went on as usual.

The Bono Regional Vice-Chairman of the Ghana Private Road Transport Union (GPRTU), Mr Justice Kwame Frimpong, explained that even though they were poised to embark on the strike, the national chairman had called the previous night to direct them to hold on for the outcome of a meeting with President Nana Addo Dankwa Akufo-Addo later yesterday.

A taxi driver, Mr Emmanuel Adjei, said for the past two years transport operators had had to bear the pain of absorbing high fuel prices which he said was affecting their business.

He, therefore, appealed to the government to remove some of the taxes on fuel to bring down the prices.