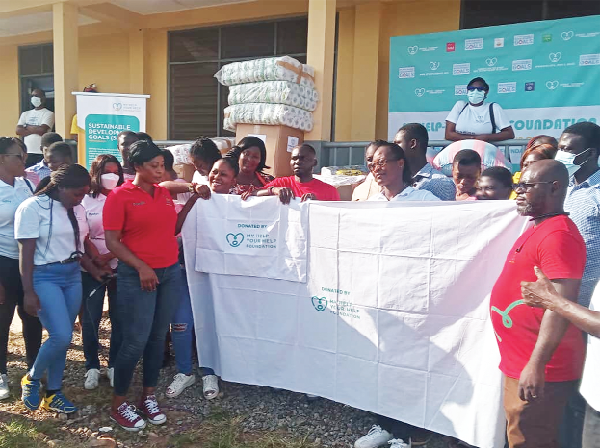 Founder of Myhelp-Yourhelp Foundation, Mr Nicholas Cofie (arrowed) with some members of the foundation displaying some of items brought to the school
30.5k Shares

A Christian charitable organisation, Myhelp-Yourhelp Foundation last Friday donated assorted items worth over GH¢40,000 to the Akropong School for the Blind in the Akuapen North Municipality of the Eastern Region.

The organisation also presented boxes of hand sanitisers, packs of soft drinks, boxes of mackerel, boxes of toothpaste, packs of milk, a box of tomato paste, bags of maize, bags of millet, bags of rice, and bags of sugar.

The team from the foundation also fed the over 300 students and staff of the school with packed lunch.

The Christian NGO was in the school to, aside from donating assorted items to them, dine with the students, encourage them, and to share the word of God with them.

The gesture coincided with three major celebrations—World Disability Day, Farmers Day and the third anniversary of the foundation.

The Founder and Chief Executive Officer of the foundation, Mr Nicholas Cofie, said the NGO believes in spreading love, hope and smiles.

He added that the foundation was conceived and built on the teachings of Christian doctrines, hence its strong belief in seeing to the wellbeing of the underprivileged such as the students of the School for the Blind.

He said the foundation occasionally visits orphanages, prison establishments, rehabilitation centres and special schools to impact the lives of the people in those facilities.

For Mr Cofie, doing good to the underserved and less privileged in society should be seen as a ministry and a worthy cause to follow by all people who believe in God, particularly Christians.

He said the foundation since its three-year inception had impacted many lives positively and would continue to do more to bring smiles, love and hope to the less privileged.

He expressed appreciation to the sponsors of the foundation, saying that their sponsorship had brought life to many vulnerable people.

The Headmistress of the school, Mrs Veronica Derry, commended the foundation for the gestures, saying that the government alone could not provide all the logistical needs of the school, hence the need for corporate Ghana, civil society organisations and benevolent individuals to support the efforts of the government.

She said the school was very critical to the development of the human capital, particularly for people living with disability.

She, however, expressed worry that some parents after bringing their children to the school abandoned them, without bothering to check up on their tuition and feeding at the school.

She said the situation sometimes became so pathetic that when the school vacated, some children had to be taken care of by the caretakers at the school, since their parents would not come to take them home.

She therefore appealed to parents not to see their children in the school as a burden but to give them all the needed encouragement and love to enable them to live their dreams.

The Akropong School for the Blind was established in 1945 and is made up of different departments from the Kindergarten to the Junior High School (JHS) level.