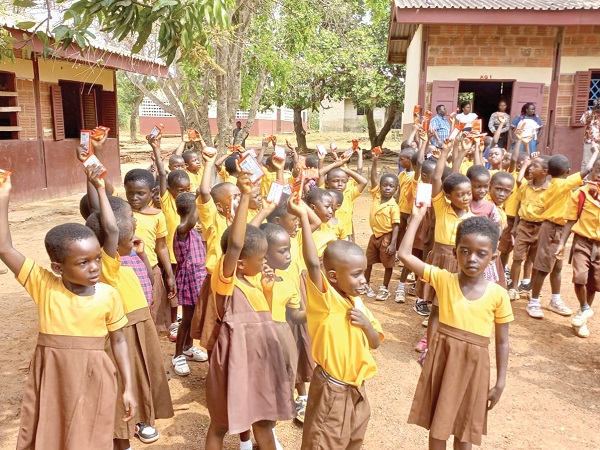 More than 15 years after instituting the National Chocolate Day as part of efforts to promote the consumption of cocoa products locally, the Ghana Cocoa Board (COCOBOD) this year decided to honour former President John Agyekum Kufuor by extending the distribution of free chocolate to pupils in his hometown at Dabaa in the Atwima Nwabiagya District in the Ashanti Region.

A team from COCOBOD, led by a member of the board of directors, Nana Adwoa Dokuah, last Monday visited the Dabaa Cluster of Schools where they distributed bars of chocolate to the pupils.

In all, more than 500 pupils benefited from COCOBOD’s gesture which formed part of activities marking this year’s Chocolate Day, which is celebrated on February 14 each year.

Nana Dokuah said unlike the previous years where just one day was used to mark the occassion, the board decided to hold the event for a week with lots of activities, all aimed at promoting the local consumption of cocoa products.

She said even though Ghana produced most of the world’s cocoa, its consumption locally had not been encouraging.

She said the free distribution of chocolate was to enable the residents to have a taste of the product and also to encourage them to consume it and create another market for the product locally.

According to her, it had been proven scientifically that cocoa had lots of health benefits and asked the pupils to impress on their parents to buy some for them at least once a week.

Nana Dokuah said contrary to the general perception that the cost of the finished cocoa products was usually beyond the reach of ordinary Ghanaians, particularly farmers, it was affordable.

She said with as little as two Ghana cedis, one could get a bar of chocolate to buy.

Aside from that, she said considering the health benefits of the product, the investment would be worth the benefits to be derived from it.

Nana Dokuah intimated that if Africans were consuming cocoa products, there would not be the need to export the product in its raw state and at the price determined by the buyer.

She said the intention was to promote the local consumption of the product in order to create a local demand for it and reduce its export.

In a related development, the company has distributed free chocolates to members of two cocoa farmer cooperatives.

About 200 farmers benefited from the free distribution of the chocolate bars.

The Atwima Nwabiagya District Chief Farmer, Nana Achiah Nantie, was grateful to the board for extending the free distribution to them.

She acknowledged the health benefits of the consumption of cocoa products and urged her fellow farmers to be regular consumers of the product.