Breast cancer patients cautioned against use of herbs 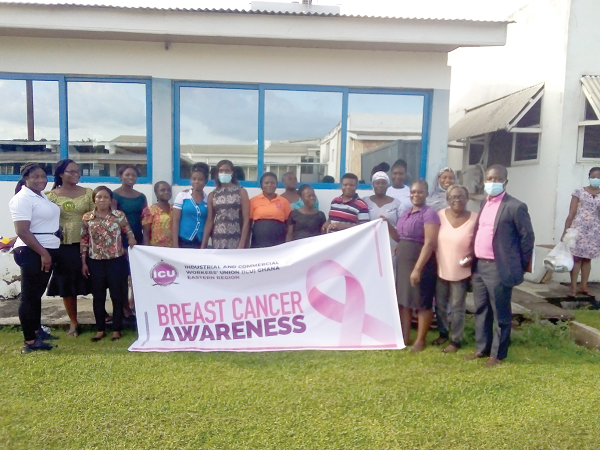 Mr Richard Kwame Kumi (right), the Eastern Regional Officer of the ICU, with some female workers of the Intravenous Infusions Limited.

Breast cancer patients have been cautioned against the use of herbal medicine for the treatment of the ailment.

Rather, they are advised to seek early medical care at the hospital, since the disease is not caused by spiritual affliction.

According to the Eastern Regional Officer of the Industrial and Commercial Workers Union (ICU), Mr Richard Kwame Kumi, breast cancer is a medical condition which could be treated at the hospital.

He, therefore, entreated women to go for constant check-ups for the early detection and treatment of the disease at health facilities.

He was addressing workers of Intravenous Infusions Limited at Effiduase in the New Juaben North municipality in the Eastern Region.

The event formed part of a breast cancer awareness and screening exercise for Intravenous workers organised by the ICU, in collaboration with the company.

“We must continue to talk about breast cancer to ensure that education and awareness creation of the disease goes down to the people,” Mr Kumi said.

Breast Cancer Awareness Month is commemorated in October every year to increase education on the disease and help those affected to go through early detection and support services.

According to Mr Kumi, the alarming rate of breast cancer in the country was disturbing and, therefore, urged women, including the young ones, to undergo screening, irrespective of their health status.

He said when detected early, the disease could be cured, for which reason women must not panic when diagnosed with breast cancer.

The officer further outlined the importance of having a healthy workforce and advised workers to regularly visit health centres to check on their conditions.

He said to attain high productivity and organisational goals, there was the need for companies and organisations to ensure that the health of their staff was adequately catered for.

A Principal Nursing Officer at the Eastern Regional Hospital, Mrs Juliet Anador, encouraged both young and old women to imbibe the habit of self-examination of their breasts to identify early symptoms of the disease for further examination at the hospital.

According to her, most women, after detecting symptoms of the disease, attributed the situation to a curse and resorted to prayer camps and herbalists for healing.

Mrs Anador said such people eventually visited hospital after the disease had reached an advanced stage.