Be proactive in preventing conflicts — ECOWAS 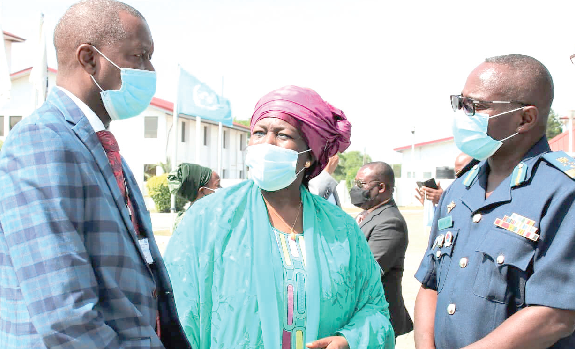 The Economic Community of West African States (ECOWAS) has urged member states to be proactive in preventing conflicts in the subregion.

The Vice-President of ECOWAS, Ms. Finda Koroma, expressed worry that the region, which is already crippled by poverty, mass unemployment and underdevelopment, would continue to be the epicentre of turmoil and turbulence if measures were not taken to stop further conflicts.

She was speaking at the opening session of a five-day induction course for directors and analysts of the coordination of early warning and responses at the Kofi Annan International Peacekeeping Training Centre (KAIPTC) in Accra yesterday.

Ms. Koroma said years of economic restructuring had not moved Africa forward, hence the need to ensure that democracy yielded dividends for the accelerated development of the subregion.

The course is being organised by the West African Network for Peacebuilding (WANEP), in partnership with the KAIPTC and with support from the European Union, the German Development Cooperation (GIZ), the African Union and ECOWAS.

The course will equip participants with relevant skills in early warning monitoring, including data gathering, analysis, reporting and dissemination.

The early warning system involves the availability of reliable data to relevant national security establishments and governments in the region to ensure the early detection of conflicts to inform the approach to adopt to deal with emerging challenges.

The system also generates timely reports on the prevention and mitigation of violent conflicts in the region to the ECOWAS Commission.

Madam Koroma suggested the use of national coordination centres for response mechanism (NCCRM) in all 15-member states and urged members to mobilise resources to improve and sustain their performance in conflict reduction, sustainable peace and security.

“This lack of effective and timely response is more pronounced as a result of the absence of competent structures to deal with peace at the community level,” she said.

She further called on members to build and sustain close working relationships with national security agencies in member states, without compromising confidential data sources or information.

“You are the frontrunner in issues that deal with human security and it will be ideal to see a symbiotic relationship. It is important to find a common ground, else your analysis may not necessarily be totally accurate, so I appeal to the national security agencies in member states to work together,” she added.

The Executive Director of WANEP, Dr. Chukwuemeka Eze, said the early warning system would provide a platform for broader participation in conflict prevention and mitigation.

He said as countries and societies continually faced human security challenges and threats from conflicts, early warning responses had gained wider appreciation and relevance as the core element for peace, security and long-term social and economic development.

The Deputy Commandant of the KAIPTC, Air Commodore George Arko-Dadzie, said despite the existence of regional security mechanisms and increasing roles of regional training centres of excellence in building capacity and research, the region was still faced with security challenges.

He, however, expressed the hope that the course would provide the needed knowledge and skills for participants to enable them to deliver their tasks of ensuring conflict prevention and transformation in their respective countries.