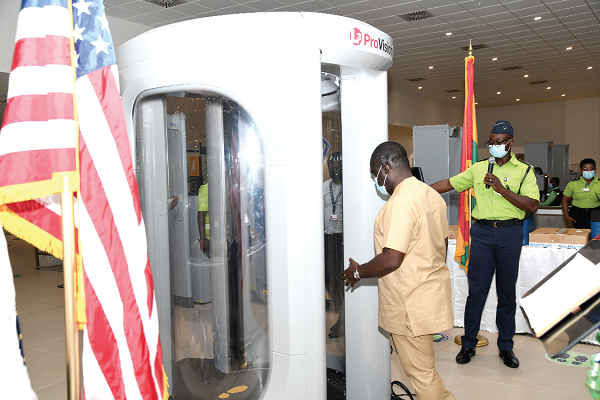 Mr Kwaku Ofori Asiamah (left), the Minister of Transport, going through the equipment during a demonstration by an official of the Ghana Civil Aviation Authority. Picture: EBOW HANSON
30.5k Shares

The advanced body scanner and nine explosive and narcotics trace detectors, which have been installed at the departure hall of the airport, were donated by the US Department of State Bureau of Diplomatic Security Office of Anti-terrorism Assistance (ATA), in collaboration with the Transportation Security Administration of the US Department of Homeland Security.

The minister was assisted by the US Ambassador to Ghana, Ms Stephanie Sullivan, the Chief Director of the Ministry of Foreign Affairs and Regional Integration, Ms Martha Pobee; the Managing Director of the Ghana Airports Company Limited (GACL), Mr Yaw Kwakwa, and the Director-General of the Ghana Civil Aviation Authority (GCAA), Mr Charles Kraikue.

According to Mr Asiamah, the aviation industry required not only safety regulations and measures, but also a robust security system to help improve on safety and sustainability.

He said the industry remained a symbol of target for terrorists and that "it is for this reason we are thankful to the government of the United States of America for donating the scanner, an L3 Body Scanner, the explosives and narcotics trace detectors under the anti-terrorist assistance aviation security enhancement programme.

"We also thank the US Embassy in Ghana for taking delivery and ensuring installation of the equipment, and taking further steps to train Ghanaian aviation security staff and technicians on its usage," the minister added.

Mr Asiamah described the gesture as timely and said it demonstrated the cordial relations between the two countries in the fight against the terrorism menace.

"I am informed that the body scanner is equipped with a robust automatic target detector with a high throughput, image free privacy which is very safe to use.

The MD of GACL, Mr Kwakwa, also said the donation had come at a time the aviation industry was facing global terrorists attack with the recent incident being in Saudi Arabia on February 10.

"The recent attack in Saudi Arabia indicates that aviation-related terrorist attacks are not ending soon," he said, adding that terrorists had become more sophisticated in their dealings and were now deploying mind-boggling techniques which were mostly difficult to counter when equally sophisticated security equipment were not deployed.

For her part, Ms Sullivan said the growth of the aviation sector in the country had increased the importance of aviation security which included screening and information sharing.

"The airport security training and equipment programme underscore the robust security cooperation between the United States and Ghana," she said.

The ambassador said as a first point of entry, the Terminal Three was a great symbol of what Ghana stood for and what it strived to become in the aviation industry in the future.

On COVID-19, she urged the public to adhere strictly to the protocols to help curb the spread of the virus in the country.

"The management of the virus requires collaboration among stakeholders and, therefore, we should all support efforts by the government to reduce the spread of the virus," she added.