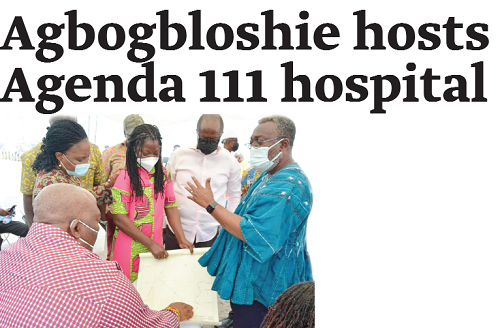 Agbogbloshie, a suburb of Accra considered one of the biggest slums in West Africa, is on a transformational path towards hosting a modern health facility under the government’s Agenda 111 project to build hospitals across the country.

Also described by some environmentalists as a place which used to house the second most hazardous place on earth because of the heavy metals and acidic billows of smoke which emanated from the area, together with burning mounds of trash, Agbogbloshie will now be home not only to a medical facility but also an astro turf and other recreational facilities.

This gave the GARCC access to more than 80 acres of land, about 15 of which will now be available for what will be known as Ablekuma Central Municipal Hospital.

The Greater Accra Regional Minister, Mr Henry Quartey, yesterday led the Presidential Advisor on Health, Dr Anthony Nsiah-Asare, to the project site in preparation for the project to take off.

On completion, the single-storey and yard will have a patient reception and processing area, administration, pharmacy, laboratory/diagnostics, physiotherapy, public health, accident and emergency facilities.

There will also be wards for surgical and paediatric cases, maternity, isolation and four theatres for surgery.

There are provisions for a mortuary, waiting and security pavilions, accommodation facility for families and doctors (separated), a laundry, waste management and energy centre, kitchen, central store and maintenance yard.

Mr Quartey recounted that for two decades, several attempts by successive governments to reclaim the land had been unsuccessful due to the strong resistance from traders who occupied the area.

However, after assuming office as a regional minister, he said, one of his topmost goals was to see the place redeveloped into something beneficial to the community rather than the insanitary condition the area was noted for.

“Due to this, in spite of the heavy resistance from the traders, we still persevered and today this land has been reclaimed but it doesn’t end there, the land must be put to good use and that is why we are here today,” he stated.

The regional minister said the RCC would provide enough land to host an ultramodern Ablekuma Central Municipal Hospital so that “the once hazardous Agbogbloshie would now be an area for healthcare delivery.”

The team also toured the available land to know which area was fit for the facility.

Agenda 111 is a government initiative which aims at making Ghana the centre of excellence in health care by 2030.

President Nana Addo Dankwa Akufo-Addo last Tuesday cut the sod for work to commence on 88 of the hospitals, with sites for 13 others being finalised.

Agenda 111 proposes the construction of 101 hospitals in districts without hospitals, two psychiatric hospitals for the middle and the southern belts, seven regional hospitals and the rehabilitation of the Accra Psychiatric Hospital.

The project, when completed, is expected to increase the country’s Gross Domestic Product (GDP) by $2 billion and create direct and indirect jobs in the health sector.

Already, $100 million has been allocated for the project through the Ghana Infrastructure Investment Fund and each is expected to be completed within 18 months from when it starts.

Mr Quartey noted that the area was in the middle of town and aside from ACMA, it was also closer to the Accra Metropolitan Assembly and the Korle Klottey Municipal Assembly and that the hospital would serve all residents in those areas.

“If we have a hospital located strategically in this area, it will serve over 100,000 people directly and indirectly, it will also create jobs and that is what we seek to do and I believe that in 18 months this vision will be a reality,” he said.

Dr Nsiah-Asare commended the GARCC for the good work it had done by reclaiming the land to ensure it was put to good use.

He said the maximum acres of land needed for the project were 15 and the GARCC had provided enough land for other facilities such as extra accommodation for the hospital staff, ensuring a complete medical village.

Aside from that, Dr Nsiah-Asare said it would also contain other important facilities to supplement some of the operations of the KBTH.

Dr Nsiah-Asare hinted that clearing of the land would soon commence and once that was done, the contractor would move to site to begin work.

“This is the essence of what the government is doing. We want to bring health care closer to the people so this project together with the National Health Insurance Scheme will help us achieve the Universal Health Coverage, which is the Goal Three of the Sustainable Development Goals, even before 2030,” the Presidential Advisor said.