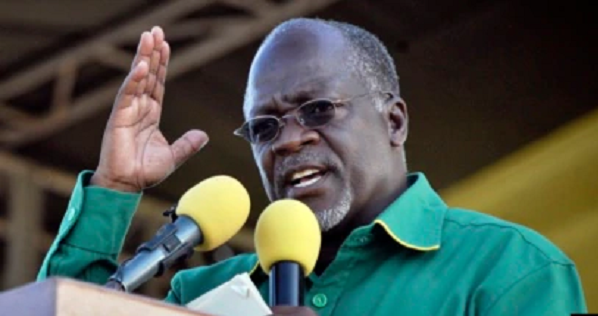 News of the death of Tanzania’s President John Pombe Magufuli, nicknamed "the bulldozer" drew mixed reactions and sorrow from many in the country and across the continent.

The  61-year-old leader died after weeks of speculation that he was infected with COVID-19. Many will remember him for his controversial handling of the pandemic in Tanzania.

His Vice Hassan is expected to be sworn in to succeed Magufuli and complete his second five-year term which he had just started after winning elections late last year. She will be Tanzania’s first female head of state.

Fourteen days of national mourning have been declared in Tanzania to mark the death of the President while fellow African leaders have begun praising his leadership.

Kenya’s President Uhuru Kenyatta, who is also the chairman of the East African Community, announced Kenya will observe seven days of national mourning in which the country’s flag will be flown at half-mast.

“In the passing on President Magufuli, I have lost a friend, a colleague and a visionary ally whom I worked with closely, particularly on our commitment to forge lasting bonds between Kenya and Tanzania,” Kenyatta said in a live broadcast yesterday.

In a statement, President Ramaphosa said he had spoken to Tanzanian Vice-President Samia Suluhu Hassan “to express condolences in his personal capacity and on behalf of all South Africans”.

“South Africa is united in grief with the government and people of Tanzania as they go through this difficult moment,” he said.

Zimbabwean President Emmerson Mnangagwa posted on Twitter, sending sympathy to the people of Tanzania: “Africa mourns with you.”

Burundi President Evariste Ndayishimiye has described Tanzania's leader John Magufuli, who has died aged 61, as a "great leader" and a "true pan-Africanist".

"What a loss to Africa," Malawi's President Lazarus Chakwera has said in reaction to the death of Tanzania's leader John Magufuli at the age of 61.

"President Magufuli was a towering symbol of Africa's economic resurgence and his passing is an incalculable loss to the continent," Mr Chakwera added in a tweet.

Rwanda's President Paul Kagame says he’s “saddened by the loss of my brother and friend, President Magufuli”. He said Mr Magufuli's contribution to the East African region "will not be forgotten".

Uganda's President Yoweri Museveni has eulogised President John Magufuli as a "pragmatic leader who believed in and worked for the economic empowerment of East Africans".

"We join Tanzania in mourning the passing of a great son of Africa," he tweeted.

Offering its condolences to Tanzanians, the United States issued a statement saying it “remains committed to continuing to support Tanzanians as they advocate for respect for human rights and fundamental freedoms and work to combat the COVID-19 pandemic. We hope that Tanzania can move forward on a democratic and prosperous path.”

As tributes come in from other African heads of state, Tanzania’s opposition leader has been outspoken in his criticism of Magufuli.

The late President was in his element on February 24, 2021 while unveiling a massive road project in Dar es Salaam - an accomplishment he boasted could only be achieved by the ruling CCM party.

"It was completed on time because no-one used corona as an excuse to delay it," he said, while applauding the contractors and also instructing government officials not to entertain anyone using the pandemic as an excuse to postpone the delivery of projects.

This one was no different to previous public functions - a choir serenaded him and he ended it with a characteristic speech extolling his mantra of Hapa Kazi Tu (Work is My Only Focus).

"Tanzania is a rich country, we have to use our wealth in order to develop," he said in his remarks, which also chastised tardiness and exhorted Tanzanians to pay their taxes. Three days later, Magufuli would be seen in public for the last time.

Since his first election in 2015, Magufuli cultivated the image of an rambunctious action man, a departure from his predecessors' demure and stately style.

His interventionist - supporters called it "hands-on" - leadership style won him fans beyond Tanzania, especially in the East African region, where he inspired the #WhatWouldMagufuliDo Twitter hashtag, praising his no-nonsense approach to fighting corruption and tirelessly following up infrastructure projects to ensure they are completed.

What most Tanzanians cared about, his fans argued, was service delivery and Magufuli's populist governing style was effective and a model for other African leaders.

Mr Magufuli's death has been blamed on "heart problems" but many will still suspect that he succumbed to COVID-19. It is an irony that the pandemic he strenuously denied has outlasted him, turning his once-heralded presidency into a cautionary tale for the region and the continent.