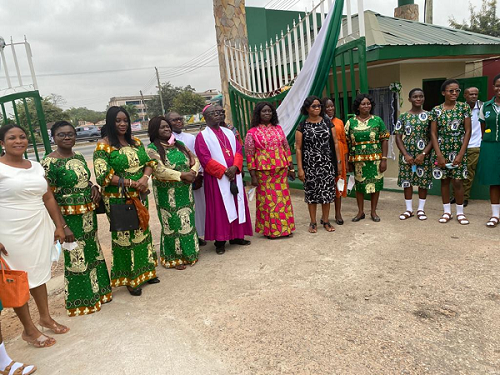 Archbishop Gabriel Justice Yaw Anokye, Metropolitan Archbishop of Kumasi Diocese (6th left), and Mrs Ama Kyerewaa Benefits (5th right) with some members of the 1978/80 year group and others during the dedication of the new gate
30.5k Shares

The 1978/80 year group of the St Louis Past Students Association (SLOPSA) has handed over a newly erected gate for the institution to the school authorities in Kumasi.

The school’s old gate had been in existence since its inception and there was a consensus for it to be replaced to enhance security at the entry and exit point of the school.

The leader of the group, Dr Akua Kese Ofori-Asumadu, said the gesture was to commemorate the group’s 40th anniversary in 2018.

The project was supervised by a member of the group who is an engineer.

A 15-member working group, headed by a three-member coordinating team with Dr Ofori-Asumadu as the Project Coordinator, Dr Betty Amenu Solomon Ayeh, Technical Coordinator, and Ms Muriel Antwi as Treasurer, saw to the execution of the project within two years with funds raised from contributions by members of the year group.

Dr Ofori-Asumadu said at a short ceremony to inaugurate the new gate that “there was consensus from the year group that the school gate needed to be changed to one that befits St Louis Senior High School as one of the best second-cycle institutions that works hard to maintain academic excellence and discipline.

The Headmistress of the school, Ms Ama Keyerewaa Benefo, expressed gratitude to the group for giving back to the institution and also called on other year groups to come on board to help build their alma mater.

Meanwhile, SLOPSA worldwide is raising funds for the construction of a two-storey dormitory project for the school in Kumasi.

The Chairperson of the project committee, Mrs Joyce Agyare, said in its bid to improve accommodation facilities in the school, it embarked on the dormitory project that will accommodate 600 girls.

Earlier, SLOPSA presented CCTV cameras and 60 pieces of LED and solar security lights to their alma mater to augment the lighting and security system on the school’s campus.

The gesture was made possible through the benevolence of SLOPSA Global, made up of SLOPSA Accra, SLOPSA Canada, SLOPSA Kumasi, SLOPSA USA (Midwest, Northeast, DMV and Texas Chapters) and SLOPSA UK.

The Parent Teacher Association (PTA) has also augmented the effort of the past students by increasing the height of the perimeter walls of the school.